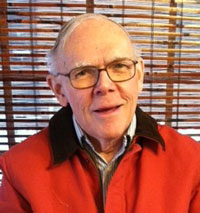 Age 91, died Wednesday, December 28, 2022, in Chelsea, Michigan, where he was a resident of the Chelsea Retirement Community. He was born November 30, 1931, in Oil City, Pennsylvania, the son of Thomas Clare and Mary Fern (Turk) Austin.

On May 7, 1960, he married Anna Marie Breyfogle in Chicago, Illinois. She preceded him in death on November 13, 2014. Ronald is survived by a daughter, Mary Austin (Carl Smith) of Gaithersburg, Maryland; a son, Stephen Austin (Anna Parise) of Ridgeway, Wisconsin; and a daughter-in-law, Laura Dresser of Madison, Wisconsin. He was preceded in death by a son, David Austin; and a sister, Sara Hudgens (Alan). Also surviving are a niece and nephew; and four grandchildren, Galen Austin, Lucy Smith, Alyssa Austin, and Nelson Dresser.

You may use the form below to share a memory or leave a public message for Ronald's family. Please allow 24 hours for us to review and post your comment.