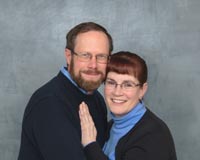 Allen Cole has been the owner and manager of Cole Funeral Chapel since 1999 when he purchased the business from his father.  He is a former high school teacher, and has been a licensed funeral director since 1991. He graduated from Chelsea High School in 1984, and earned his Bachelor's degree from Michigan State University.  He has been happily married to his high school sweetheart, Wendy, since 1988.  An Eagle Scout, he spent 14 years as a 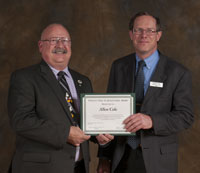 Cub Scout leader in Pack 435 here in Chelsea, and was the Troop Committee Chair for Boy Scout Troop 413 for many years. Allen attends Chelsea Church of the Nazarene.  He has been a runner since his days on the Chelsea High School Cross Country Team, and tries to complete a marathon and/or triathlon most years.

Wendy Cole is Allen’s wife, the co-owner, and is the office manager and book keeper for the funeral home.  She often helps write and submit obituaries, and sometimes helps at visitations.  Wendy is actively involved in Chelsea Church of the Nazarene. Wendy & Allen have three children, Brian, Josh, and Nathan.

Chelsea Update story about Allen's 25 years as a funeral director

Donald Cole was a licensed funeral director who owned and managed the funeral home from 1977 - 1999. He was married to Linda for over 60 years, and raised three children (Beth, Allen, and Dale).  Don died September 20, 2021 after a long illness. Click here to see his obituary.

Linda Cole lives in Chelsea, and occasionally helps at the funeral home. She is a volunteer at the Chelsea Community Hospital.

Jen Collins is our office assistant. She lives in Chelsea with her husband and kids.

Paul Marshall is a funeral assistant from Chelsea. He and his wife Barbara, raise therapy dogs.

Tim Ehnis is a funeral assistant, he lives in Chelsea with his wife Judy and is a member of North Sharon Baptist Church.  Tim retired from the US Postal Service.

Josh Cole is Allen & Wendy's son, and is helping out in many ways. He is a graduate of Spring Arbor University.