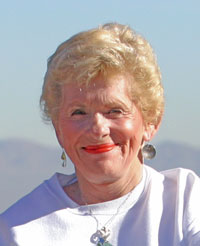 of Las Vegas, NV, age 84, died Tuesday, May 7, 2019 in Las Vegas, Nevada.   She was born May 6, 1935 in Detroit, Michigan, the daughter of Harold H. & Marjorie (Morris) Moons.  Marilyn graduated  from high school in Detroit in 1953, then earned a Bachelor's degree in education from Michigan State University.  She was an elementary teacher in the Detroit Public schools.  She was a member of St. Matthew Catholic Church in Detroit.  Marilyn and Howard enjoyed sailing, and were very active in the racing program at the Detroit Yacht Club and the swim team activities with their kids.   Marilyn & Bruce retired to the golf course Sun City Summerlin in Las Vegas - both enjoyed golfing and had three beloved dogs while living there.

The family will receive friends at Cole Funeral Chapel in Chelsea, MI on Thursday, May 16,  from 4 - 8:30 pm, with a Rosary service at 7:30 pm.  Funeral services will be held at Our Lady of Fatima, Michigan Center, on Friday, May 17, Noon,  with Fr. Sateesh Alphonse officiating.  The family will greet friends at the church from 11:30 - noon. Burial will be Mt. Olivet Cemetery in Chelsea, Michigan.

Comments:
#1 Laurel Baciulis Smit This email address is being protected from spambots. You need JavaScript enabled to view it. 2019-05-13 18:15
It is so strange to know Mrs Riley isn’t around. Mrs Riley was always there when we were growing up. She wasn’t hanging over us, but she was always THERE. Many (((hugs))) to make up for all the years i missed. I always loved your girls, i liked you driving swim team practice, I liked knowing you were at swim meets and at the DYC afterwards.you looked great at Shannon’s wedding. I’m sure that must have been the last time I saw you. Much love, Laurel