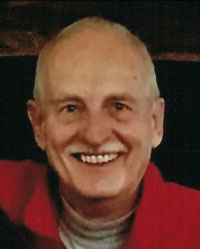 Of Chelsea, Michigan, formerly of Dayton, OH, age 75, died suddenly and unexpectedly on Tuesday, October 13, 2020 at the U of M Hospital. He was born July 18, 1945 in Long Island, New York, the son of Donald Carl & Geraldine (Semple) Redic.
Dave graduated from Mercer High School in 1963, and then Grove City College, Ohio University, and Wright State University. He had a variety of professions. Dave worked in air pollution control and environmental regulation and enforcement. He was also an entrepreneur who owned his own business. Dave valued hard work of any sort, and he was a respected manager across his many jobs. Dave had strong values which were reflected in his loyalty to his family, and his reliability in his routine and habits. He volunteered after he retired as a way to give back and to honor his values. His volunteering included working at a food pantry, transporting senior citizens, and donating blood. Dave was an avid gardener, and loved to be outdoors, swimming, biking, and running. He enjoyed traveling with friends, playing cards, and weekly pool games at the Senior Center.  Dave was full of life, humor and good cheer.  He loved being a husband, father, and grandfather, where his values live on.
Dave married his high school sweetheart, Diane Miller, to whom he was devoted for 58 years of marriage. He is also survived by two daughters, Kimberly Redic of Dexter, Margaret “Maggie” (James Hicks) Redic of San Francisco, CA; three grandchildren, Emma Kill, Benjamin Kill, and Stella Kill; two sisters, Lacey (Kirk) Young of Toledo, OH, and Lynn Slater of Grove City, PA.
Private services were held. Memorial contributions may be made to Faith in Action (Chelsea, MI), or the Alzheimer’s Association. Arrangements by Cole Funeral Chapel.
You may share a memory or leave a message for Dave's family using the form below. Please allow up to 24 hours for us to review and post your comments.

12
#11 Dianna Brisco 2020-10-20 16:32
Diane, My heart aches for you and your family at the suddenness of Dave’s passing. Please know I am praying for the peace and comfort of our Savior to completely surround and sustain you. I’m so very sorry for your pain.
Quote
#10 Paul haines 2020-10-20 15:41
Diane sorry to hear about Dave’s passing.A mutual friend mentioned it at lunch today.
Quote
#9 Judy P Dorezas 2020-10-20 08:23
Dave was always a kind thoughtful friend and ready to participate in whatever came along. We will miss traveling with him and his humor and grin. He lived his life with Diane filled with love and commitment. Our thoughts and prayers are with you and your family. Hugs Judy & Mike
Quote
#8 Greg Crystal Hemker 2020-10-19 20:04
Diane, Thinking of you and your family with Dave's sudden passing. We wish the best for you & your family. Focus on the great memories.

Greg & Crystal
Quote
#7 The Shirleys 2020-10-19 17:58
Diane and girls, so sorry to hear of Dave’s passing. He was so friendly And considerate with his riders on Vantran and we were lucky to have him as long as we did. Remember all the memories you’ve made. They will get you thru these days. Upon hearing of Dave, Jack and I thought of the good times back when our families were young. You are in our prayers.
Donna & Jack.
Quote
#6 James Scowden 2020-10-19 09:20
Diane condolences to you and your family. Dave was a good friend and a good guy.
Quote
#5 Ron Bartholomew 2020-10-19 01:44
Shocked and saddened to hear of Dave's passing. Good man and good friend. Thankful we were able to hook up later in life and enjoy some wonderful adventures together. May he rest in peace.
Quote
#4 John Hayman`` 2020-10-18 18:29
Diane, I am so sorry to hear of Dave's passing. The long relationship you two had is a great blessing, cherish that time.
I know that you will never forget the whole experience you had with Dave. Just remember that your classmates are thinking of you, and we remember all that you two went through so many years ago. Stay strong. John Hayman
Quote
#3 Marilyn Germano Gamb 2020-10-18 17:12
Diane,
My heartfelt sympathy to you and your family. You are in my thoughts and prayers.
Quote
#2 Max Rishell 2020-10-18 12:37
Sorry for your loss. Dave was one of the good guys.
Quote
12
Refresh comments list