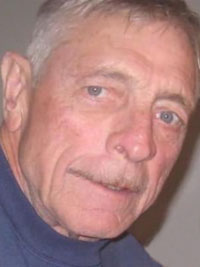 of Chelsea, Michigan, age 83, died Saturday, October 10, 2020 at his home at the Pines in Chelsea. He was born September 14, 1937 in Plymouth, Michigan, the son of John & Florence (Hebert) Daoust. Paul was a very hard working man providing for his wife and five children.  His skills as an iron worker took him across the country from the crew assembling the Seattle Space Needle, to the bridges spanning the Ohio River in Cincinnati, and finally back to Michigan.  As a proud member of the UAW, he worked for many years in Skilled Trades at the GMC transmission plant in Ypsilanti.  Paul and his wife Marilyn’s home was often referred to as “The Chelsea Hotel”  where they always welcomed extended family with open arms, especially during the summer.  He treated everyone as his friend.  He enjoyed keeping up his yard, small garden and pool.  Paul also very much loved to read.  Paul was a member of St. Mary Catholic Church in Chelsea.
In November 1960, he married Marilyn Flynn. She preceded him in death on September 14, 2020. He is survived by two sons, John (Jennifer) Flynn of Livonia, Paul F. Daoust of Lincoln Park; three daughters, Colleen (Edwin) Hettinger of Portage, Mary Pederson of Oxford, Kelly (Chris) Decerbo of Rustin, LA; a sister, Jean Hall of Leesburg, VA; 8 grandchildren and 6 great-grandchildren. He was preceded in death by 4 brothers, 4 sisters, and one grandchild.
A Funeral Mass will be held Friday, Oct. 16, 11:00 am at St. Mary Catholic Church in Chelsea, with the V. Rev. Dr. William J. Canon Turner officiating.  Burial will follow at Mt. Olivet Cemetery in Chelsea.   Arrangements were entrusted to Cole Funeral Chapel.
Click here to watch Paul's funeral mass
You may share a memory or leave a public message for Paul's family using the form below. Please allow up to 24 hours for us to review and post your message.