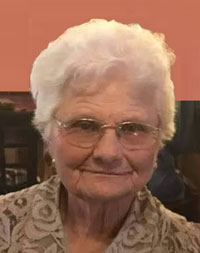 of Pleasant Lake, MI, formerly of Chelsea, age 89, died Wednesday, September 16, 2020 at Henry Ford Allegiance Hospital in Jackson. She succumbed to the effects of COVID-19 14 days after she tested positive. She was born April 28, 1931 in Salem Township, Michigan, the daughter of Kenneth S. & Irene D. (Bennett) Proctor.

Marj truly wanted God's light to shine through her life.  She cared about people so much that for many years she opened her home to families of patients being treated at the headache clinic in Chelsea.  She was committed to Campus Crusade for Christ (now known as Cru) and through them performed courageous acts of service.  For 7 weeks in 2005 following Hurricane Katrina, she helped feed thousands of displaced people at God’s Katrina Kitchen in Pass Christian, Mississippi.  She also made two trips to Afghanistan to help widows learn sewing to support themselves, and to share the message of Jesus.

Marj loved helping people and was known for her hospitality. She enjoyed interacting with students during the 6 years she worked at the Chelsea High School media center.  She also worked 13 years providing hospice care through Individualized Home Nursing Care. She loved helping and being with her children, grandchildren, and great-grandchildren. She cherished the times she and Phil spent square dancing, traveling, and visiting with friends.

While raising their family, she and Bob attended the First United Methodist Church in Chelsea. Later she attended Trinity Ev. Presbyterian Church in Plymouth. Most recently she and Phil attended Northwest Baptist Church in Jackson.

You may share a memory or leave a message for Marj's family using the form below.  Please allow up to 24 hours for us to review and post your message.

#7 Janine Hartman 2020-09-28 08:19
Darlene, so sorry to hear about your mother. She was such an example of God's work on earth. Hugs and prayers to your family.
Quote
#6 Jeffrey Hager 2020-09-24 08:47
Dale, Darlene, Denise, and Duane,
Sorry to hear about your Mom's passing. I best remember her energy and her commitment during my four years at Chelsea HS. May she rest in peace.
Quote
#5 Sue Ryan Guenther 2020-09-19 13:39
So sorry for the family’s loss. I grew up next to Marg and her family. I have such fond memories of her. She taught me how to sew and she also rode with me when I was learning to drive. I also remember all the fun I had learning to water ski at Cavanaugh Lake with Marg and the Robbins family. Sending prayers to her family. I know she’s on a fabulous journey.
Quote
#4 Randy Guenther 2020-09-19 09:59
I am so so sorry for your families loss! She was a wonderful lady.
Quote
#3 Jana Lou W. Dreyer 2020-09-19 08:30
So sorry to learn of Margie's passing. We go way back in 4-H and school. Her brothers and sister were always a special part of my life. I last saw Margie outside the Chelsea Hospital, she was coming out and I was going in. LOTS OF HUGS!! She was such a GREAT GIVING CHRISTIAN person and she will be in my Heart Forever.
Til we meet again in Heaven!! Lovingly Jana Lou
Quote
#2 Alfretta Grieb 2020-09-18 18:28
Sorry to hear of Marjorie's passing. She led a very good Christian life helping many people over the years.
Prayers for her family for strength and courage at this difficult time. She is with God now.
Quote
#1 Frank Grohnert 2020-09-18 18:03
Marj was a wonderful person. I am in awe of all that she accomplished in service of others.
Quote
Refresh comments list