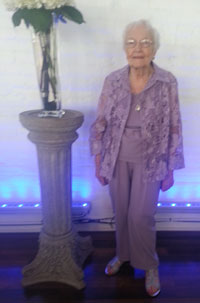 of Chelsea, Michigan, formerly of Royal Oak and Howell, age 98, died Tuesday, July 28, 2020, at Chelsea Community Hospital. She was born February 10, 1922, in Detroit, the daughter of J. Wesley and Alice J. (Bryan) Dennis.  Margaret graduated from Central High School in Detroit in Jan 1940. She worked in accounting with Bell Telephone for 2 years. She then studied Social Studies at Adrian College, where she met Donald. She later earned her Master's Degree in Guidance Counseling from MSU. She taught at Utica School District and later Howell School District where she retired in 1985. Margaret attended Chelsea United Methodist Church.

On August 2, 1947, she married Donald E. Rink in Detroit. The late Judge Rink preceded her in death in 1998. She is survived by her son Donald “Lee” Rink of Bloomfield Township; two sisters, Alice Louise “Allie Lou” Paterson of Adrian and Janet Douglass of Farmington Hills; a sister-in-law, Katherine Suydam; and many nieces and nephews.

A memorial service will be held Tuesday, August 25 at the First United Methodist Church in Adrian, with Rev. Eric Stone & Rev. Julie Kilmer officiating.  Due to Covid restrictions, please call Cole Funeral Chapel at 734-475-1551 if you would like to attend.  Memorial contributions may be made to Adrian College, 110 S. Madison St, Adrian, MI  49221 (please put "Dennis/Rink Scholarship Fund" in memo line) or the United Methodist Retirement Community Foundation, 805 W. Middle St, Chelsea, MI 48118 ("In memory of Margaret Rink" in memo line). Arrangements were entrusted to Cole Funeral Chapel in Chelsea.

You may use the form below to share a memory or leave a message for Margaret's family.  Please allow up to 24 hours for us to post your comments.

#3 Mary Lear 2020-08-25 16:03
Thinking of you today Aunt Margaret! I will remember your intelligence, your love of painting with always a new project you were working on, or a new class to take. And most of all, your goodness! In you and Aunt Allie Lou, I have been blessed with the kindest and most loving aunts possible. You contributed so much by your presence! I am grateful for your contribution to my life. Love always
Quote
#2 Tom Rink 2020-08-25 11:47
Visiting Aunt Margaret in Chelsea was one of the highlights of our annual trips to Michigan. She remained active, kept up with technology, and was still very young at heart. Her positive outlook on life and upbeat attitude always made us feel uplifted when we visited her. She was a wonderful aunt and we will miss her smile and insights on life.
Quote
#1 Pam Rink 2020-08-05 16:06
I will miss sweet Aunt Margaret. She was such a positive and loving person. The Oklahoma redheads (and one brunette) will always keep you in our hearts.
Quote
Refresh comments list