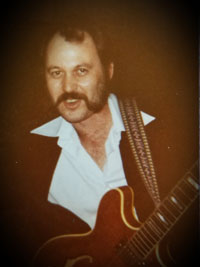 Spider, age 77, passed away peacefully at his home on Tuesday, June 30, 2020 surrounded by his family. He was born June 10, 1943 in Ypsilanti, Michigan. He graduated from Whitmore Lake high school in 1961. Rumor has it that he got his nickname from the football team he played on.

After attending college for a couple years he discovered the music scene in Ann Arbor. Spider was well known in the Ann Arbor music scene. He played in numerous bands in and around the Ann Arbor area for over 50 years. Many musicians, local and touring, bought their instruments from Spider.

He adored his four grandkids Michael C. Wynn, Elise and Maxwell Blakeman, and Addison Conely. He was an avid reader, enjoyed golfing, repairing instruments, going out to lunch with his bandmates and getting together and " jamming" with them.

He will be greatly missed by his family and all who knew him. His sense of humor, modesty, and calm demeanor will be remembered.

Cremation has taken place and a celebration of his life hosted by his musician friends will take place at a later date. Arrangements by Cole Funeral Chapel.