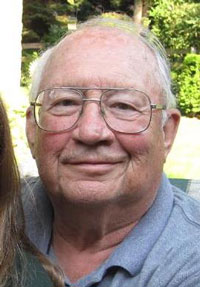 Emil "Bill" Bethke, a lifelong resident of Ann Arbor, passed away peacefully on June 22, 2020 at the age of eighty-seven.  After graduating Ann Arbor Pioneer in 1950, he served in the U.S. Air Force, where he was stationed in Alaska and Washington. In the Air Force he worked on the communications team, flew search and rescue missions as well as played hockey and baseball including the midnight sun game in Fairbanks, Alaska. Bill returned to Ann Arbor where he worked for Michigan Bell / AT&T for thirty years followed by ten years at the University of Michigan in telecommunications.
He was happiest with a fishing pole in one hand and a beer in the other. He loved German food, Nancy's apple pie, fishing, hockey, golf, summer vacation at the lake, reading, and his dog, Bo. He was the world’s best dad and grandpa. He was known for great, big hugs and a warm, loud laugh. He taught his family to enjoy the little things in life, to question the rules, that honesty is the only option, and that everyone puts their pants on one leg at a time.
Bill was predeceased by his beloved wife of sixty years, Nancy Leigh Bethke, in 2019.  Survived by daughters: Carrie (Jayson) Barroso of Ann Arbor, and Jennifer Bethke (James Campbell) of Glenview; grandchildren: Morgen Barroso, Erik Barroso, Spencer Campbell, and Blake Campbell; sisters: Nancy (Gary) Dresselhouse and Judi (Jack) Erwin.
No services are planned at this time.  In lieu of flowers please send donations to St Jude Children's Hospital.  Arrangements were entrusted to Cole Funeral Chapel in Chelsea.
You may use the form below to share a memory, or leave a public message for Bill's family.  Please allow up to 24 hours for us to review and post your comments.

#2 Jana Chambers 2020-07-14 19:07
Bill and Nan were so sweet and kind. I worked with Nan at Dr Worsham’s office many years ago before moving to Midland and now I’m located in Allendale. We visited them many years ago after leaving AnnArbor.
I first heard of Nan’s passing last Christmas and failed to connect with Bill. Upon trying to reach him, I found his obituary:(. So sorry to hear of his passing so soon after Nan. My heartfelt sympathy to their daughters And grandchildren.
Quote
#1 Nancy Leigh 2020-07-05 17:47
We have wonderful memories of Nancy and Bill and their visits to the
their visits to the farm all those years..most
recently to South Haven
His congenial nature and hearty laugh are what
will be remembered.
Quote
Refresh comments list