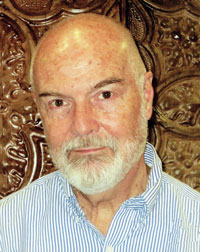 Age 81, died peacefully at home of natural causes on Monday, June 8, 2020. He was born February 21, 1939 in Detroit, Michigan, the son of George R. & Florence Irene (Armstrong) Cook.  Ralph graduated from Hope College and then served in the U. S.Army from 1962-1964. After the Army, he went on to graduate from the Medical School at Wayne State University. He then completed a Residency at University of Michigan and earned an MPH from the School of Public Health. Ralph later studied Epidemiology at University of North Carolina.  He was employed at Dow Chemical & Dow Corning for 32 years.
In May of 1969, he married Joann Kovack in Detroit, and she survives. Other survivors include two children, Eric C. (Amy Weimer) Cook  and Kara A. (Derek) Cudini, both of Ann Arbor; a brother, Robert (Carla)  Cook of Almont; 4 grandchildren; and 1 niece & 1 nephew.
No services are planned at this time.  Memorial contributions may be made to the UMRC Foundation, 805 W. Middle St., Chelsea, MI 48118 or Arbor Hospice, 2366 Oak Valley Drive, Ann Arbor, MI 48103.  Arrangements were entrusted to Cole Funeral Chapel in Chelsea.
Click here to view or sign Ralph's online guestbook