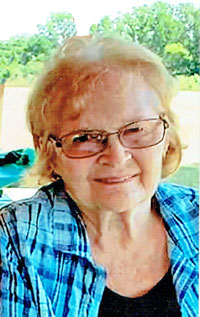 Age 79, died peacefully Wednesday, June 3, 2020 at her home with her family around her. She was born November 8, 1940 in  Ann Arbor, Michigan, the daughter of John William & Alta “Blanche” (Manor) Andress.
Joyce was a former member of Chelsea First United Methodist Church and later attended Immanuel Bible Church. Early in her career she worked as a stenographer for the Social Security Administration. Joyce also ran a daycare from the late 70’s to early 2000’s. She loved her cats and donated to the Humane Society and other animal organizations. She and Glenn were members of the Jaycees. She attended the Chelsea Wellness Center for many years and enjoyed going to events at the Senior Center.  Joyce had many collectibles, she also enjoyed a weekly game of Chinese Train with her family.   Joyce loved to travel and take her family with her, spending precious moments with her grandchildren.

On October 23, 1965, she married Glenn Gordon Weir in Ann Arbor, MI, and he preceded her in death on April 28, 2014. Survivors include four children, Tim (Marie) Weir of Michigan Center, Daniel (Kim) Weir of Chelsea, Jennifer (Ryan) Hudson of Jackson, Amy (Matt) Majeske of Chelsea;  7 grandchildren, Geoffrey, Rileigh, Ayden, Will, Gauge, Morgan, Madison, and Lucas Weir expected in July; a sister, Carol Palluth of CA; a brother, Lyle (Marcia) Andress of Ann Arbor; and many nieces and nephews. She was preceded in death by an infant grandson, Caleb Weir, a sister-in-law, Shirley, and brother-in-law Bill Palluth.

The family will receive friends at Cole Funeral Chapel on Tuesday, June 9. Due to Covid restrictions, please call the funeral home at 734-475-1551 to schedule a time to pay your respects.  Private funeral services will be held on June 10.  Memorial contributions may be made to the Humane Society of your choice.