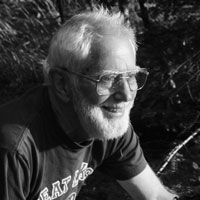 “No Les, no more”
of Chelsea, Michigan, formerly of Ann Arbor, age 86, died peacefully on Sunday, May 17, 2020 at Chelsea Retirement Community, of Alzheimer’s Disease. He was born March 27, 1934 in Boston, MA, the son of William Llew & Persis (Worcester) Rogers.  Les graduated from Pleasantville High School, Pleasantville, NY in 1951. He graduated from Ohio Wesleyan University in 1955, and earned an MS and Ph.D. in nuclear Physics from Case Western Reserve University. In 1968 Les moved his family to Ann Arbor to start his career at Bendix Aerospace, where he worked on a project to design a Life Detector Module for the Mars Lander.  In 1970, he was recruited as a research scientist in the Division of Nuclear Medicine at the University of Michigan, where he not only had a very distinguished career, but also found a home. During his career he held appointments as a Professor and Research Scientist in the Departments of Internal Medicine and Biomedical Engineering. He served as an academic advisor for graduate students and was a grant reviewer for the National Institutes of Health.
Les was an outstanding researcher and scientist, a creative problem solver, a patient teacher and mentor. He held several patents and authored many publications, scientific presentations and several book chapters. In 1998 he was awarded the IEEE Edward J Hoffman Medical Imaging Scientist Award. He retired in 2000.
Although he made significant contributions to medical imaging technology what he loved most were the human connections. Having colleagues, collaborators and students all over the world gave him immense pleasure and enriched his life greatly. When his Alzheimer’s had progressed to a stage where he could no longer explain the work he did, he was still able to express the joy he received from the relationships he’d made.
Outside of work, Les enjoyed keeping busy with home improvement projects, camping, fishing, canoeing, photography and building sets for Burns Park Players. He loved exploring the Upper Peninsula, searching for the perfect campground, hiking to a secluded waterfall.  One of his proudest achievements was the design of a vacation home in Big Bay, MI.  He spent 10 years carefully planning, revising and perfecting every detail of the house. It started as a modest vacation cottage and ended as a 2400 sq ft. 3 bedroom, 3 bath winterized house on the shore of Lake Superior.
Les was meticulous in every phase of every project that he undertook. He never met a grade 2000 sandpaper that he didn’t like, never left a seam unspackled, a fence rail unlevel, a martini unstirred, or an olive unskewered. He exemplified the phrase “If you’re going to do it, do it right.”
Les was known for his great sense of humor. He loved practical jokes and had an inherent ability to make puns. He was able to retain his skill with words well into his cognitive decline. Once, recently, when asked if he wanted to visit a yarn store he replied, “I am not a knitwit.”  The worse the pun, the louder the groan, the happier he was. When he learned that turkey buzzards returned annually to Hinckley, Ohio on the Ides of March he decided it was a fitting cause for celebration and every year a Buzzards Day Party occurred complete with a buzzards leap contest and a call for scientific papers.
On March 4, 1962, he married Ann Wood in Alliance, OH, and she survives. Other survivors include three daughters, Virginia (Kevin Curnow), Helen (Ted) Lardner, Katherine (Tim Peitsch), grandchildren, Trevor and Owen Curnow, Isabel and Caleb Lardner, siblings John (Barbara), Persis (Richard) Granger, nieces and nephew Robin and Laurel Granger and Lisa and Richard Wood.
He was preceded in death by his parents, his stepmother Virginia Rogers, and his sister, Nancy Bonsal
A celebration of life will be held at a later time. Memorial contributions may be made to the Alzheimer’s Association or the charity of your choice.  Arrangements were entrusted to Cole Funeral Chapel in Chelsea.
True to his sense of humor and love of puns, Les was known to proclaim that his epitaph should read, “No Les, no more”.
Click here to view or sign Les' online guestbook