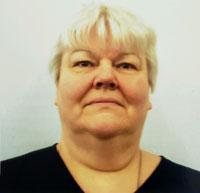 of Gas City, Indiana age 74, died Monday, May 4, 2020 at the Wesleyan Health and Rehab Center in Marion, Indiana. She was born January 8, 1946 in Detroit, Michigan, the daughter of Joseph and Josephine Barbara (Blass) Lutchka. She was baptized at the Bushnell Congregational Church in Detroit, MI.  Martha graduated from South Lyon High School in South Lyon, Michigan in 1964. She attended Eastern Michigan University in Ypsilanti, MI where she received her Bachelor of Science degree in 1968 and Masters degree in 1969. She was a member of Tau Beta Sigma a band fraternity. She received her teaching license in 1971 as a speech therapist and taught at the South Lyon elementary school. She taught there until she married Lewis Miller in 1974, who worked at the Environmental Automobile Certification division of the EPA at Ann Arbor, MI. She moved with her husband for the next 30 years when he began working for the Veterans Administration moving to various locations within the United States. The first move was to MN, then TX ,PA, IN. OR, NB, and OK. They retired to Gas City, IN in 2003, where she resided until her death.

Martha was an organizer and basically started and supported Laubach Literacy program in Grant County, IN and taught potential tutors and assigned them to illiterate adults who wanted to learn how to read. She also organized the Home schooling program of Grant County, IN and taught her own children at home from elementary grades through high school. She received numerous certificates for her efforts from the many organizations with which she was associated. She loved to knit and crochet. One of her final projects she continued during her terminal illness was crocheting Christmas stockings for infants born during December at Marion General Hospital.

She is survived by her husband, Lewis Miller and her two sons, Seth in KY, and Peter in IN; a daughter, Audra married to James Monson, residing in WI; and a brother, David Lutchka and his wife, Joan , their children and numerous grand children in MI. Martha has no grand children.

A memorial service is tentatively planned for Sunday, June 28, 1:00 pm at Eastgate Community Church in Marion, IN.  Memorial contributions may be made to Eastgate Community Church for the Wednesday night children classes. Arrangements are by Cole Funeral Chapel, Chelsea, MI. Half her ashes will be interned at Grass Lake Cemetery and half at Las Animas Cemetery in CO, along with half and half of her husband’s ashes when he dies and is cremated. So she may be in both family plots.

You can use the form below to share a memory or leave a public message for Martha's family.  Please allow up to 24 hours for us to review and post your comment.