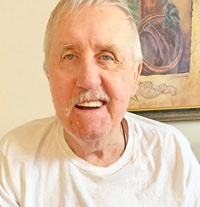 of Milan, MI, formerly of Gregory, MI, age 73, died Sunday, May 3, 2020 at St. Joseph Mercy Hospital in Chelsea. He was born March 11, 1947 in Altoona, PA , the son of Donald L. & Ida Belle (Daughenbaugh) Davis, Sr.  Don attended Wayne High School, then join the US Army during the Viet Nam war, serving in Korea.  He was a member of the American Legion #570 in Stockbridge.   Don and his first wife, Marcia, owned “Don's Snack Shack” in Stockbridge.    He also worked for Paramount Coffee for over 20 years.  He loved boating and lived on Woodburn Lake in Gregory for many years.  He attended Crossroads Community Church in Stockbridge, and after they moved to Milan, attended Calvary Baptist in Ypsilanti.
On October 25, 1969, he married Marcia M. Himmelein in Las Vegas, NV, and she preceded him in death on April 15, 2008. On July 21, 2012, he married Sharon (Wolff) Pritt, and she survives.  Other survivors include a son, John (Michelle) Davis of Unadilla; a daughter, Jamie (Mike) Lewis of CA; his step-mother, Rosalind "Rose" Davis of Westland; 4 grandchildren,  Jacob, Madyson, Dakota, John Jr.; 4 great-grandchildren, Tyler, Brody, Alex, Brooklyn; his siblings, Judith Stewart, Mary Wilkins, Katherine (Kevin) Stress, James Davis, Donna (Andy) Anastasia, Patrick (Teresa) Davis; his step-children, Stephan (Robin) Pritt, Michelle (Richard) Getchell, Jacqueline (Stephen) Ardrey; step-grandchildren, Paige, Emily, Riley, Madeline, Carson, Elizabeth, Sawyer, Philip; and 3 step-great-grandchildren, Arabella  Eleanor and Rowan.
He was preceded in death by his parents; a daughter,  Wendy Davis of Unadilla; a grandson, Bradley; and a brother, Sam Davis.
Bud (Don) had a stroke in June of 2013. Sherry cared for him from that day forward. They moved from the lake in 2018 to a handicap accessible home in Milan so he could be at home. He had many problems but she was always at his side to fight for him. He wasn't always able to be home but whenever possible she had him there. When he wasn't able to be home she spent long hours sitting with him. She took him to every family event that she could. He wanted to go to Charlies in Perry for burgers whenever possible. He will be missed by all of us but the biggest heartache is with his wife and family. When the covid virus prevented visits she called several times a day. He has many friends to mourn his loss also.  Don's family would like to thank Sherry for the love and care she gave to Don during his last years.
A memorial service will be held at a later date. Memorial contributions may be made to the Chelsea Retirement Community, 801 W. Middle St, Chelsea, MI 48118; or to Huron valley PACE, 2940 Ellsworth Rd, Ypsilanti, MI 48197.  Arrangements were entrusted to Cole Funeral Chapel in Chelsea.
You may share a memory or leave a public message for Donald's family using the form below.  Please allow up to 24 hours for us to review and post your comment.