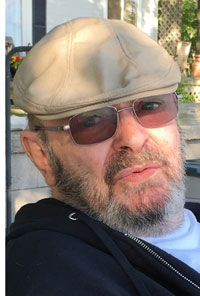 Gerald “Jeri/Jerry/Jere” Tartoni was born on September 9, 1941, to Helen (Lazzeri) and Guiseppe “Joe” Tartoni.  He took his final bow on April 21, 2020.  In his life, Jeri took the road less traveled. After graduating from Bentley High School in Livonia in 1959 he married and started his family at the same time as he pursued his college education. He graduated from Eastern Michigan University majoring in political science and philosophy and earned an accelerated fellowship at Wayne State University.
Jerry had a brilliant mind. He loved to challenge his oldest daughter, Natalie, to logic games at a very early age, which he regretted when she became a teenager.
Jerry was a great teller of stories and cultivated the imagination and creativity of his children and grandchildren. He loved literature, music, and poetry. He was an original foodie, but he would also eat anything his young children made for him, including a beautiful sugarless grape kool-aid pie his daughter Leah made and saltine pancakes his daughter, Nicci, made when they were young.  He ate his children’s creations with a smile on his face (no matter how disgusting it was) to encourage their culinary creativity.
He loved to write obscure poems with skewed spelling and doodles of cubes. He would share these poems with anyone, but especially his children, who often thought it was a form of punishment or torture.
Jerry enjoyed philosophical conversations. He often did this on long hikes or over a game of chess with his son, Joe, teaching him how to think analytically by looking at any topic from a variety of angles.
Jeri introduced his family to his life partner and best friend, Beth, at his nephew’s wedding in 1994. Her love, support, and guidance made him a better man, father, and grandfather/Nonno. She became the bridge between the past and the present and an integral part of the entire family.
Jere will be remembered and missed by his soulmate, Beth Yaroch, his four children: Natalie (Ed) Masha, Leah (Mark) Hilty, Nicci (Wade) Rosted, Joe (Erin) Tartoni, and his eleven grandchildren: Cody Masha, Dustin Masha, Courtney Hilty, Matthew Hilty, Keelie Rosted, Kacy Rosted, Averi Rosted, Caden Rosted, Max Tartoni, Mia Tartoni, and Evelyn Tartoni. He will also be missed by his former wife and friend, Nancy Tartoni, his siblings, Don (Jan) Tartoni, Sylvia (Larry) Tengel, Linda (Jay) Lindsey, and many nieces, nephews, and friends. And also by his beloved cats, Mylez and Potter.
A celebration of life will happen at a later date when we can be all together.
Please share a memory or leave a message for Jerry's family using the form below.  Note that it may take up to 24 hours for us to review and post your comment.

#4 Anne, Ken, Addison 2020-05-01 19:38
Our deepest condolences to you, Beth, and to all of Jeri’s beautiful family. He is so proud of them all! Jeri seemed to be an old soul, always had deep insight into anything and everything. We will always remember Jeri whenever we enjoy a sunset on Long Lake, as he enjoyed them, too!
Quote
#3 Diane and Ken Pierce 2020-05-01 17:07
Our Hearts and Prayers of Comfort are with You All.
Quote
#2 Paul and Miriam 2020-05-01 14:05
Our deepest sympathy to you Beth and Jeri’s family. Jeri’s legacy is one to cherish. Hopefully many happy memories shall fill the emptiness you may now feel.
Quote
#1 Mary Jane Helvie 2020-05-01 13:41
My condolences as you deal with your grief at this difficult time.
Quote
Refresh comments list