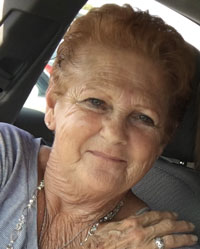 We are saddened to announce the death of Gail Margaret Starr of Pinckney, MI, formally of Chelsea, MI of the Hoffman Family. Gail was 72 years young and died too soon on Wednesday, March 18, 2020 at St. Joseph Mercy Hospital in Chelsea following a long battle of illness. She was born August 26, 1947 in Ann Arbor, Michigan, she was one of eleven daughters and one brother of Maurice & Lucille Emma (Barnhardt) Hoffman.  In 1952, an article in the Citizens Patriot titled “GIRLS GALORE” was posted about a family in Chelsea MI with eleven girls and a single son.  The article stated there was "a man in Chelsea, MI with enough daughters for a baseball team”.  Gail’s father, Maurice Hoffman, promptly phoned the newspaper and said “That’s nothing, we’ve got enough girls for a football team, with a son left over to coach”.  Gail and all of her siblings attended St. Mary’s grammar school and Chelsea High school.  Gail married in the late 60’s and was a homemaker and loving mother and wife on a horse farm in Gregory, MI. She and her sister Debbie started Clean Sweep, a house cleaning business in the 80’s which she continued to work for almost 40 years until her death.

Gail remarried and loved to line dance with her late husband Art.  She had a passion for planting her flower garden every spring.  She enjoyed visiting with her friends on early evenings in the summer to watch the boaters on Portage lake, and of course, chit chat.  But most of all, she loved her family and friends wholeheartedly and without pause. She was someone that you could always count on.  But she could NEVER cook potatoes all the way through.

She was preceded in death by both her parents, Maurice & Lucille Emma Hoffman of Chelsea, MI; eight sisters, Phylis Dalton, Maurine Kohler, Joanne Hoffman, Yvonne Minick, Rose Ann Osinski, Carol Sutfin, Sally Higgins and Deborah Kearney; her first husband and father of her children, Gary George Paxton, who also passed away just four months prior on December 23rd, 2019, in Jackson, MI; and her second husband, Arthur Starr, who passed away on March 12th, 2013.

Due to the COVID-19 virus issues within our communities and across our country, a memorial service will be held at a future date when family and friend can travel and gather together to remember this remarkable woman.  Please check  www.ColeFuneralChapel.com,  along with Facebook for updates.  Her family will post updates on Gail’s Facebook home page that can be found by searching "Starr Gail”.  Arrangements were entrusted to Cole Funeral Chapel in Chelsea.

You may share a memory or leave a public message for Gail's family by using the form below.  Please allow up to 24 hours for us to review and post your comment.

#7 Michael. Hafner 2020-04-05 12:46
I'm so sorry to hear this news Lorrie Ann. When
I heard about you dad i wanted to reach out to
you but i didn't know how. You've been in my thoughts
Take care of yourself..... Always with love
Quote
#6 Pete Flintoft 2020-04-02 20:55
I am so sorry to learn of Gail's passing. Growing up on South Main my thoughts go back to Phyllis, Maurine, Joanne and Yvonne as our favorite baby sitters, to going to the races with my uncle Carl and Maury, and to having the pleasure of seeing all the members of the extended Hoffman family as we go through life. Gail, like all the family, always added more back to life. Our condolence to her children, grandchildren and great grandchildren and to Mary, Barb and Fred our hope for more years.
Quote
#5 Bob Riemenschneider 2020-04-01 19:52
I am so sorry to hear of Gail’s passing. Gail exemplified the Hoffman spunkiness and was so much fun to be with. I know that she is in a better place surrounded by her many sisters and parents that have passed before her.
Quote
#4 Robin Scripter 2020-04-01 03:05
Lorrie and Chad I am so sorry for you all. You lost a great Mom.Gail was always so friendly. My sincere sympathy.
Quote
#3 Tammy Boggs 2020-03-31 20:17
Chad, Lorrie, Amber & Andrew & Families. Sorry for the loss of your Mom, and Grandma. She was a special person. She made Dad very happy. I will be thinking of all of you.
Quote
#2 Debbie Garrett 2020-03-31 19:21
I still am finding it hard to comprehend you are no longer here. I wanted to call you Saturday for our coffee chat. Thank you for calling me “ daughter”. You will remain in my heart always. I love you Momma Gail. You are so missed.
Quote
#1 Lorrie Patrick 2020-03-31 15:23
I MISS YOU SO DAMN MUCH.. I FELT YOU IN MY BED LAST NIGHT.. PLEASE KEEPI COMING BACK TO ME. I LOVE YOU MOMMY
Quote
Refresh comments list