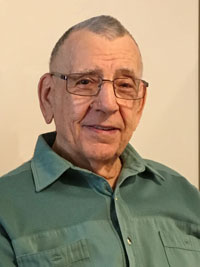 of Chelsea, MI, age 93, died Tuesday, March 17, 2020 at Silver Maples of Chelsea. He was born October 16, 1926 in Trenton, MI, the son of Alexander “Angelo” & Agatha (Cima) Angelocci.  Angelo graduated from Slocum Truax High School, in June of 1944. From there he was inducted into the United States Army infantry in Word War II. He served both in the United States and in Japan. He enrolled at Eastern Michigan University in 1947, where he met Joyce Gladys Hartung. He received his BS degree from Eastern Michigan University, in 1950, his MA from the University of Michigan in 1951 and his PhD from Wayne State University in 1962. Angelo’s teaching career began at Seaholm High School in Birmingham, MI, 1951-1958. He then continued teaching at Western Washington State University in Bellingham, WA, 1962-1965 and taught at Eastern Michigan University 1965-1988. He was a professor in the Department of Special Education and a member of the Arm of Honor Fraternity at Eastern Michigan University. Professional affiliations included: life membership in the American Speech, Language and Hearing Association; member of the Michigan Speech, Language and Hearing Association; High Scope Educational Foundation; State Career Education Advisory Council; Washtenaw County United Way Board, and the People’s Community Hospital Authority. Other community interests included active participation in the Dexter Community Players and volunteering at the Chelsea Senior Center and ALI in Chelsea. Pastimes included travel, music, reading, theater, playing bridge, dining out and the company of his many friends. Church affiliations were with St. Luke’s Episcopal Church, Ypsilanti, St. James Episcopal Church, Dexter and most recently St. Barnabas Episcopal Church, Chelsea. First and foremost, Angelo was devoted to his wife and family.