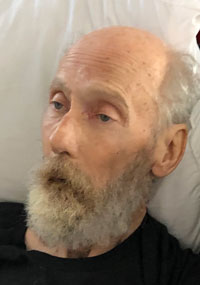 Michael Norman Wilson of Manchester, formerly of Belleville, Ann Arbor, Detroit, Garden City and Cheboygan; At age 69, died Tuesday, March 3, 2020, at the home of friends in Manchester, where he found respite and was living intermittently for several years.  He was born January 25, 1951, in Detroit, the son of Norman Delbert Wilson and Mary (Butler) Wilson.  He was the youngest of 11 children growing up on a poultry farm in Belleville.
He served in the US Army , during the Vietnam War from 1970 to 1972, where he was a decorated combat infantryman.
Mike was a career truck driver for a mid-sized Michigan based company where he received a Million Mile Safe Driving Award. Due to a serious illness he was no longer able to continue this work.
Although he was homeless since 2004, he was a valuable member of our community. Private individuals and small business owners in the Ann Arbor community contributed to his wellbeing for many years.  He was stubbornly independent and strived to repay his debts. Despite battling physical and mental challenges, he always showed integrity and honesty.
He was preceded in death by his parents and siblings. He is survived by loving friends, Andre & Lori Marcoux, and his church family at Zion Lutheran Church (Chelsea).
A memorial service will be held Saturday, May 2nd at 11:00 am at Zion Lutheran Church, Chelsea, with Pastor Kathy Tulman officiating.  A private burial will take place at a later time.  Memorial contributions  may be made to  Zion Lutheran Church for burial expenses, or to MISSION Ann Arbor to continue their efforts toward assisting the community of people who are homeless.  Arrangements were entrusted to Cole Funeral Chapel in Chelsea.
You may share a memory of Mike using the form below.  Please allow up to 24 hours for us to review and post your message.

#4 Susan Hawkins 2020-03-10 17:31
I only met Mike once and I would like to thank you for telling me his story. He was a very lucky man to find your family. You are are a blessing .
Quote
#3 Laurie 2020-03-09 11:32
Lori & Andre, YOU are exactly what Christ wishes for us brothers and sisters to be. I greatly admire you. The love and caring you gave to Mike is beyond measure. Bless both of you.
Quote
#2 Lori Marcoux 2020-03-08 19:47
We miss you Mike. We're sharing your story with friends, NOT because of what we have done for you, but because of what YOU have done for US. I know that has been hard for you to understand. We can talk about it when I get there. Rest peacefully in your new and final home.
Your friend, Lori
Quote
#1 Mary Tobin 2020-03-08 09:11
I am so sorry, Andre and Lori. Mike was blessed to have you in his life.
Quote
Refresh comments list