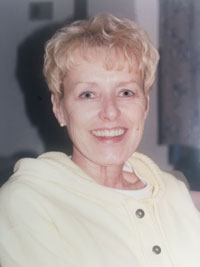 of Chelsea, Michigan, age 74, passed away Tuesday, September 10, 2019 at her home surrounded by family and friends. She was born October 14, 1944 in Virginia, Minnesota, the daughter of Owen Charles Ash and Bernice Marie Vivian (Anderson) Norlander. She and her brother Jeff were raised by their mother until she married John Norlander in 1963 and acquired two more brothers John and Michael Norlander. She spent her youth in Virginia, Minnesota and summers on Lake Vermilion until graduating high school in 1962. She also attended Virginia Junior College. Later she moved to Minneapolis to become a flight attendant with North Central Airlines in the early 1960’s. She married and had two children, Kristen and Anna. The family moved to Chelsea in 1973. During the time her children were of school age Phyllis was involved in a variety of school and community activities. In 1986 Phyllis went back to the airlines to reclaim her love for travel until her retirement from Delta Airlines in 2006.

Phyllis loved traveling with her mother Bernice (Bunny) and they made many trips together across America and throughout Europe. In 2010 Phyllis began volunteering at the Chelsea Community Hospital gift shop and continued to do so until just a few months before her death. She was on the gift shop committee and served as secretary from 2012-2019 and was also on the Chelsea Hospital Auxiliary Board where she served as secretary from 2013-2016. She enjoyed reading, spending time with friends and family and most of all her grandchildren (Evelyn, Ryder and Roxy) to whom she was a devoted grandmother.

She is survived by her daughters, Kristen Brown of Woodstock, CT, Anna Folsom (Tim) of Index, WA; her brothers, Jeff (Moira) Ash of Grand Haven, MI and John (Charmy) Norlander of Rochester, MN. She was preceded in death by her father, mother and step-father and her brother Michael and cousin Diane Tonn.

A celebration of her life will be held at the Chelsea Depot on October 24 from 4-7 p.m.  Memorial contributions may be made to JDRF, 26 Broadway, 14th Floor, New York, NY 10004 or Arbor Hospice, 2366 Oak Valley Dr, Ann Arbor, MI 48103.  Arrangements were entrusted to Cole Funeral Chapel.