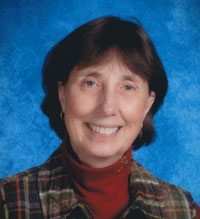 Melanie Claire Hopp passed away at her home in Chelsea, MI on April 13, 2019 after thriving in the face of cancer for many years.  She was well-supported in her final days by her loving family, her many friends and Arbor Hospice. Melanie was born in 1957 in Livonia, MI to Elliott and Marjorie Parrish.  She met her husband of 40 years, Wallace Hopp, at Michigan State University.  They married in 1978 and settled in Chicago where they restored an old Victorian house and raised their two children, Elliott (of Auburn Hills) and Clara (of Detroit).  In addition to creating a warm home, Melanie worked as a learning specialist who taught special education students in the Chicago Public Schools and later in Ann Arbor.

Melanie was also highly active in every community in which she lived.  In Rogers Park, Chicago, she was Local School Council President for her neighborhood elementary school, a Hospice volunteer and organizer of the famous Morse Avenue Fourth of July Parade.  After returning to Michigan, she became a dynamic member of the Chelsea First United Methodist church, an involved volunteer at Cass Community Social Services in Detroit, and an engaged participant in the Chelsea and Ann Arbor communities.  Despite her physical disabilities, Melanie found many ways to perform small acts of kindness for a wide array of people.

In addition to her husband and children, Melanie is survived by her brother Stephen Parrish of Livonia, her mother-in-law Rosemary Hopp of Chelsea, a large number of cousins, nieces, nephews, in-laws, close friends, and her dog Domino, all of whom she held dear.

You may use the form below to share a memory or leave a message for Melanie's family.  Please allow up to 24 hours for us to review and post your comments.