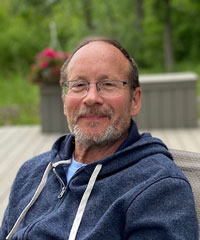 Richard Damian “Dick” Lutovsky, Captain of Old Yeller and Founder of Dick’s Last Resort on Patterson Lake, passed away on Sunday, September 25, 2022, at his home with loved ones. He faced his battle with dementia with strength and courage. He leaves the Dam Site Inn and life in general a little quieter now that his laugh is gone.

A Michigander through and through, Dick was born in Ann Arbor on April 12, 1957, the son of Raymond E. and Rosemary A. (Lyons) Lutovsky. Dick graduated from Chelsea High School in 1975, and then attended Ohio Technical College. He returned to Chelsea and worked at Chelsea Proving Grounds as an Impact Technician, finally retiring in 2020.

Dick found joy living his ideal laker life driving his pontoon boat around the Patterson chain of lakes. He savored the finer sides of Michigan: a good IPA, an all-night bonfire, the opening of deer season, and the Lions Thanksgiving game, particularly when Nickelback was the halftime show. A cyclone of energy, he spent many hours training and competing in triathlons across the state, and often he was seen running or biking on the Potawatomi trail and dirt roads close to him. Little in stature but big of heart, Dick will be missed by everyone he helped—and that list is very, very long as his generosity and warmth made him a “go-to” guy. Need a snow plow? Go to Dick. Need help fixing a lazy susan? Go to Dick. Need help putting in or taking out your boat? Go to Dick. He constantly modeled how to be a kind, giving man.

He was happiest, though, with his wife Jessica Lytle, whom he wed on July 18, 2009, arguably the coldest day of the month. He is also survived by sisters, Teri (Doug) Shiels of Adrian, and Joan Lutovsky of Gregory; mother- and father-in-law, Linda and R.P. Lytle; sister-in-law, Emily (Jason Polk) Hill; one niece, Danielle (Mitchel) Schilling; two nephews, Chris (Rani) Shiels and Brenton (Amber) Shiels; and his puppy, Manager Honey. He was preceded in death by his parents.

In lieu of flowers, memorial contributions may be made to the St. Louis Center, https://stlouiscenter.org/ or Arbor Hospice https://www.arborhospice.org/.

Click here to watch the memory video of Dick's life

You may use the form below to share a memory or leave a message for Dick's family.  Please allow up to 24 hours for us to review and post your comments.

#10 Texas Tornado 2022-10-04 15:07
Oh sweet Dicko,
To say you’ll be missed is an understatement. Your love for my sister will always be first and foremost why I loved you so much. Thank you for being an amazing husband. There are so many memories I’ll forever hold close to my heart.
Thank you for being the life of the party especially with that precious laugh of yours!!
XOXO
EmYo
Quote
#9 JANE ELIZABETH LYTLE 2022-10-01 17:58
Dick was great fun and a very loveable guy! We were very close in our birth dates and enjoyed having that birthday closeness! I have the greatest respect and affection for him and will miss him very much! God Bless Him and all those who love him!

Jane Lytle-Vieira
Quote
#8 Erica sawallich 2022-09-30 09:59
Dick was awesome his laughter filled the service lane
Everyone loved him .he was such a joy to waite on .je was very true to pinckney chrysler.when he came in you would think he worked here .he was a friend and will truly be missed.may you rest in peace my friend
Quote
#7 Debra Rossbach Eaton 2022-09-29 11:38
Dick was the life of the party in our Biology class! He will be dearly missed! ❤️
Quote
#6 Paul Wood 2022-09-29 09:16
Dick was a class act, that always put a smile on my face! We need more like him!
Quote
#5 Sharon Sweet 2022-09-28 20:23
Rest In Peace friend. I’ll remember those high school days forever! CHS Class of ‘75
Quote
#4 Don Pierson 2022-09-28 19:35
Till we meet again Dick...yes you were always the example of kindness.
Quote
#3 Don Murray 2022-09-28 18:18
Well, not many may know how Dick came to use that as his nickname. Curt Winans will. As freshmen, Dick went as Rick. Being one to only tease people I like, I started to call Rick, Dick. And wouldn't let up. It was all in good fun. Then, it stuck. And the rest is history.
Quote
#2 Bill Harper 2022-09-28 16:04
We first met Dick when he rented our Halfmoon Lk Cottage. He was in-between homes and was looking to move on the lake. He immediately fit right in with our group of lake friends whom he called “Lakers”. After he moved to Patterson Lk, “Dick’s Last Resort” was always a favorite stop on the pontoon boat tour. We’ll miss his crazy laugh and happy go lucky style. May he rest on calm waters….. The Lakers
Quote
#1 Larry Doll 2022-09-28 11:45
Farewell Dick, the Lutovsky and Doll kids, first cousins, were a mainstay growing up. Sledding the hills followed by hot chocolate. Our Mom's were sisters, the better halves of Ray and Don.
They say "cousins are your first friends". I believe that.
I'll miss you dear cousin.
Quote
Refresh comments list