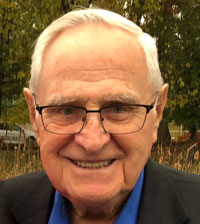 Coyne moved to Chelsea, MI in 1941 where he graduated from the Chelsea School District. After graduating, he met the love of his life, Betty Tanner, and was married on March 6, 1951. Immediately after he was married, he served two years in the Army in combat in the Korean War. Coyne worked for Chrysler for a total of 32 years; during which he took a brief time off to study Christian ministry with aid from the G.I. Bill. He then resumed work for Chrysler while founding and ministering his own church, Deerfield Union Church in Deerfield Center of Northern Livingston County for 9 years. After this, Coyne became assistant pastor to the Dexter Gospel Church in Dexter, MI for several years. Coyne aided in the building of the new church located on Baker Road in Dexter, performed many weddings and funeral services, and continued to find great enjoyment and fulfillment in his involvement with Dexter Gospel for the past 70 years. Coyne's favorite bible verse was John 3:16, “For God so loved the world that he gave his only begotten Son, that whosoever believeth in him should not perish, but have everlasting life.”

He married Betty J. Tanner on March 6, 1951, and they celebrated 59 years of marriage before her death on Nov. 30, 2010. Coyne is survived by his children, David (Bonnie) of Michigan Center, Daniel (Unson) of Honolulu, Donald (Barbara) of Dexter, Thomas (Marsha) of Dexter, and Timothy Holiday of Dexter. Also surviving are ten grandchildren; two great-grandchildren; and many nieces and nephews. In addition to his loving wife, he was preceded in death by his daughter, Donna Holiday; brothers Carl (Maryanne) Holliday, Farmer (Virginia) Holliday, Chalmer (Gaye) Holliday, Cash (Anne) Holliday; and half siblings Alma (Goble) Salyer, Blaine (Imagene) Carpenter, Clyde (Daisy) Holliday, and Clarence (Alma) Holliday.

Funeral services will be held Tuesday, August 9, at 11:00 a.m. at Dexter Gospel Church, Dexter, with Pastor Dan Robelen officiating. Burial will follow at Oak Grove East Cemetery, Chelsea.
The family will receive friends at Cole Funeral Chapel Monday from 4-8 p.m., and at the church from 10-11 a.m. Memorials may be made to the Dexter Gospel Church 2253 Baker Rd. Dexter, MI 48130.

You may use the form below to share a memory or leave a public message for Coyne's family. Please allow 24hrs. for us to review & post your comment.

#3 Norma kerr 2022-08-03 21:48
Sweetest nicest person you could ever know. So glad he was my Uncle
Quote
#2 Janet Marie Tanner 2022-08-03 21:30
So sorry to hear about Uncle Coyne, he was one of my favorite Uncles. Prayers and love to his family.
Quote
#1 Tom Cubberly 2022-08-03 21:08
Sorry to hear of Coyne's passing, but rejoice he is in heaven awaiting us! I worked with Coyne at Chrysler in the 70's and he was a delight to be around. Always upbeat, and a smile. We talked often about the Lord Jesus and Coyne's Dexter church. He will be missed but we will see him again "Near to the Heart of God," one of the songs he liked to sing with Betty in church.
Quote
Refresh comments list