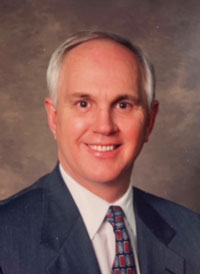 It is with great sorrow we announce the death of David C. McLaughlin of Chelsea, MI. He passed away unexpectedly on May 27, 2022 at the age of 78 in his beloved hometown. David was an adored husband, father, grandfather, brother, friend, and attorney. He was born in Chelsea, MI on March 6, 1944, son of Jean F. (Dancer) McLaughlin and Russell A. McLaughlin.

David graduated from Chelsea High School in 1962 and was an outstanding athlete. He played on the varsity football team beginning as a freshman and set records in track and field as a hurdler. He went on to play football at University of Michigan and graduated in 1967. He received his law degree from Wayne State University in 1970. He opened his law practice in Chelsea, MI in 1972 and continued practicing law until his death.

His childhood involved summers on Cavanaugh Lake where he and Jane also raised their three children. He traveled the Great Lakes fishing with his close friends. David later developed a passion for hiking and biking. He hiked the Appalachian Trail and the Pacific Crest Trail. His biking adventures spread through Michigan, New York City and Europe. In recent years, he also enjoyed living with his wife in Spring Lake, Michigan and Melbourne Beach, Florida as well as their travels abroad. His most precious time involved holidays and summers together with family.

David will be immensely missed and his honorable virtues will remain in those he has touched, especially his wife, children, and grandchildren.

You may use the form below to share a memory or leave a message for David's family. Please allow up to 24 hours for us to review and post your comments.

#9 Kathy Hirsch 2022-06-10 12:42
Jane, I was sorry to hear about David's passing. I pray that God will bless and lead you through this time of grief and that the power of the resurrection of Jesus Christ to all who believe will give you hope and purpose for your life ahead.
Quote
#8 Maleeda Holmes 2022-06-05 16:30
Dearest Jane and Damon,
We are so saddened to hear of the passing of Mr. McLaughlin. Despite not being from Chelsea, I was able to make memories including you all in Ann Arbor, Chelsea, and Hawaii. Most recently, feeling the love and support from you all, and David, in March. Thank you for always showing up for us. What an exemplary person and friend David was to Holmes family. We are sending our love and support. Love, Maleeda
Quote
#7 Jane Sklar 2022-06-04 17:13
Dearest Jane Marie,
My first thought of David (being a younger cousin) was how much I enjoyed reconnecting, as an adult, with the both of you as we spent time together for pre and post U of M football games at your home. I remember you telling me what a wonderful husband he was and the unmistakable look of love and adoration on your face whenever you looked at him, even if he didn't know it.
My love to you and all of your family,
Jane
Quote
#6 Don Blalock 2022-06-04 08:44
I must say that I enjoyed Dave in high school, a friend for sure. I especially enjoyed playing football, a fellow runner in the backfield. It was sure a surprise to hear of his passing. Thanks to Charlie Koenn for letting me know. May heaven be everything Dave thought it would be.
Quote
#5 Jerry Ashby 2022-06-01 15:51
I will miss you as my friend, my Attorney, my former neighbor at Cavanaugh Lake. Most of all I will miss the friendship you extended when I moved to Chelsea to take over the State Farm insurance agency. May you forever Rest In Peace.
Quote
#4 Sharon Myers 2022-05-30 21:54
Jane & family. Our hearts are so sad to hear about David. Even though we don’t see each other very often, I still cherish our friendship. Sending our love to you & your family. May God give all of you comfort.
Quote
#3 Donald Sexton 2022-05-30 20:35
David and I were on the same sports teams at Chelsea High. In track we usually won 7 events per each event. David was an exceptional athlete and person.
We were related to each other
, Our grandparents were siblings, I am sorry to hear about Davids sudden passing. All our best to Jane and Family.
Quote
#2 Ellen Eckhardt Breed 2022-05-30 09:53
I was just thinking about Dave the other day and hoped that I could talk with him again when I visited Chelsea this summer. I saw him every few years when I came back to visit (I live in The Vilages, Fl) & he was always the same smiling, warm, gracious person that he had been in high school. I will miss him and heaven is enriched by his presence. Rest well, Dave.
Quote
#1 Duke Weiss 2022-05-29 11:00
Dear Jane and Family,

David was my best friend and I believe I am a better person because of his guidance, compassion and wisdom, as so many others are. May God's love help heal your loss.