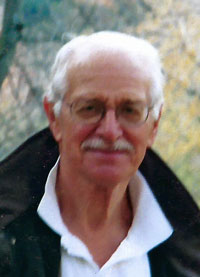 Beloved husband and father, Jim Menlove, died on Tuesday, March 1, 2022, at his home in Chelsea. He was 91. Jim was born in 1930, in Bangor, North Wales, to professional soccer player Bertie Menlove and Ada Randall Menlove. As a young man, Jim served in the British Army’s Corps of Signals. He then went to work for Lloyd’s Bank of England, and later, of Canada. In the US, he was vice president and trust officer at NBD and Comerica banks. He was Director of Fundraising for Beaumont Hospital for many years.

One of Jim’s greatest passions was for soccer. He was proud that his father had played for English Premier League teams like Crystal Palace, Aston Villa and Sheffield United in the 1920’s. Jim watched many matches at Conor O’Neill’s Pub in Ann Arbor with “the lads” – a group of soccer-lovers and dear friends. Jim was also an avid distance runner and participated in the early days of Detroit’s Motor City Runners in the 1960’s and ‘70’s.

Jim was a generous, attentive father who taught his daughters the beauty and importance of athleticism, literature, music, film, art and philosophy. He loved to ponder the nature of existence over a pint of Guinness or a finger of bourbon, and was a man who loved knowledge, language and history. With his passing goes a great deal of wisdom.

Jim was married to Ruth Conlon on October 15, 2005, in Blissfield, MI. He is survived by his wife and his daughters, Susan Julia, Janine Menlove-Eybs and Leia Menlove, all of New York; by stepsons, Damien Dlugokinski of MI and Mark Dlugokinski of OK; by former spouses and friends Alfreda Menlove-Noble and Pamela Acutt-Menlove; and by 14 grandchildren, 3 great-grandchildren and numerous nieces and nephews. He was preceded in death by his parents and sister, Joan Menlove-Chandler.

A memorial service will be held Saturday, April 9, 11:00 am, at the First Congregational Church of Chelsea, 121 E. Middle St, Chelsea, MI, with The Reverend Dr. Barbara Edema and Revs. Sherrilynn (JyakuEn) Posey and Susan Julia officiating. Memorial contributions may be made to the Michael J. Fox Foundation for Parkinson's Disease. Arrangements were entrusted to Cole Funeral Chapel in Chelsea.

To watch Jim's memorial service, click here (service starts at 15:40 of the video)

You may use the form below to share a memory or leave a public message for Jim's family. Please allow 24 hours for us to review and post your comment.

#3 Tammie Creed 2022-04-09 12:12
Dear Susan, Janine and Leia, Damien and Mark,
I am so sorry your loss and wishing all of you peace. Uncle Jim has always been a man very dear to my heart. Some of my favourite memories involve spending time with the Menlove's. My father was so fortunate to have such a close friend in Jim. And I was lucky to call him my godfather.
Quote
#2 Keith Chandler 2022-04-07 03:42
My Lovely Uncle Jim, an incredibly kind and loving man, my Dear Mum's only sibling. All our love and best wishes to our American family at this very sad time. Keith, Lauren and Lily xx.
Quote
#1 Susan Julia 2022-03-06 15:09
Traveling mercies for your journey, beloved father. You will be much missed but never forgotten. May you rest in peace knowing you will live on in the hearts and souls of all of us who have loved you so very, very much. ❤️
Quote
Refresh comments list