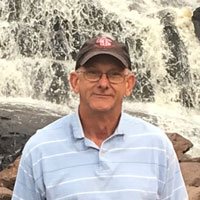 of Chelsea, Michigan, 63 years old, was born July 5, 1958 in Superior Township to John Stephen Posegay and Evelyn Gertrude Posegay. He married Valerie Anne Theobald in 1983. John joined his Heavenly Father on Friday, February 11, 2022 after a courageous battle against tongue cancer. John grew up in Westland, Saline, Milan, and Chelsea. He grew up with a Christian Faith.

John retired from Washtenaw County Road Commission after 27 years of service. He started as a mechanic and retired as an Inspector and Weighmaster. Prior to that, he worked as a mechanic at Complete Auto Transit in Willow Run and at Woods Dairy Farm in Saline. He received his Associate’s Degree in Heavy Duty Mechanics from Ferris State College.

His son at a young age was proud to tell everyone that his Daddy was a Comanic! John’s joys in life were designing useful things out of most peoples’ junk. He loved his dogs, farming, hunting, fishing, bowling, remote control airplanes, dirt bikes, tinkering on cars, body work and painting, and Waterloo Boy stationary engines. He was a Lifetime member of the NRA. He also enjoyed spending time with his children and grandchildren. He always believed that there was a lesson to be learned in every situation and initiated opportunities for that to happen. He wanted people to think for themselves and trust in their capabilities. He would direct lots of questions to the young and old to accomplish this. Over the years John was described as an old soul, a traditionalist but mostly as unique!

He is survived by his wife Val; children John J. Posegay (Eimy) and Rebecca L. Posegay (fiancé Eric Blough); his grandchildren Celeste, Emma, Gabriella Posegay; sisters Diane Hovatter (Tom) of Willis, MI, Denise Lehman (Tim) of NC and Gayle Posegay. He was blessed with many nieces and nephews, sisters and brothers-in-law, and father and mothers-in-law. He was preceded in death by his parents and his fishing buddy sister-in-law Lynn.

With gratitude, Funeral Services will be entrusted to and take place at Cole Funeral Chelsea in Chelsea, on Tuesday, Feb. 15 at 11:00 am. Officiating will be Pastor J.J. Posegay and Pastor Ann Salyer. Visitation will be Monday from 1-3 & 5-8 pm and Tuesday from 10-11 am. The family has respectfully asked for masks to be worn. Contributions can be made to Big Brothers Big Sisters of Washtenaw County (www.bbbswashtenaw.org) and/or Trail Life (www.traillifeusa.com).

Click here to view the video of John's funeral service

You may share a memory or leave a message for John's family using the form below.  Please allow up to 24 hours for us to review and post your message.

1234
#33 David Gailbreath 2022-02-17 16:24
To the Posegay family, John was in my class at Saline High. He was a really nice guy. Please accept my sincere condolences.
Quote
#32 Gayle Fischer 2022-02-17 13:28
Val & family, am so sorry to hear of John's passing. You are just wonderful people. My deepest condolences.
Quote
#31 The Corwins 2022-02-15 10:48
Val, JJ and Becky. Praying that you will find peace and comfort. We know there are many joyful memories of your life with John. We will miss his laugh and joking sense of humor.
Quote
#30 Aaron Berkholz 2022-02-15 08:08
John was not only a well-respected colleague, but a good friend to many at the Washtenaw County Road Comm. I not only learned a great deal from John, but he added much needed levity to many stressful situations. His thoughtfulness extended beyond the workplace, as he often inquired about my family. He will most certainly be missed by many, including myself. Rest In Peace, John.
Quote
#29 Bill Bruckman 2022-02-15 08:02
Val,
My deepest sympathies for you and your Family. I was surprised when Jay called to tell me about John. John was a special guy and will always have a warm memory in my heart. My thoughts and prayers will be with you and the kids. God Bless!
Rest In Peace John ole buddy! You let us way too soon but I’m sure God has a special plan for you up there in Heaven!! Hope to meet up with you sometime in the future up there!
Quote
#28 Doug Fuller 2022-02-14 08:40
My pleasure to work with John @ the Road Commission. Any day when I interacted with him was a good day. Rest well John.
Quote
#27 Cindy Dotson 2022-02-14 08:21
My heartfelt sympathies. I will always cherish our childhood memories.
Quote
#26 WCRC Permit Family 2022-02-14 07:53
Your friendship and kindness will be missed. But your professionalism , passion, knowledge and leadership forever lives in the hearts and minds of your teammates. Rest well John.
Quote
#25 James Hui 2022-02-14 07:09
I worked with John at Washtenaw County Road Commission. The last 6 years working with John was a great learning experience for me. John was a dedicated worker and was a great teacher. He was a very kind and caring person. Condolences to the family.
Quote
#24 The Foleys 2022-02-13 23:53
Val, JJ and Becky, we are so sorry for your loss. He was also a very helpful and kind neighbor.
Quote
1234
Refresh comments list