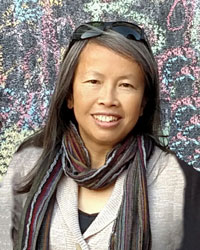 of Chelsea, Michigan, age 51, died Sunday, June 6, 2021 at U of M Hospital in Ann Arbor. Born on April 17, 1970 in Saigon, Vietnam, Trinh Thi My Bui was a child born in the midst of a civil war that was confusing to those caught on both sides. After the fall of Saigon in 1975, Trinh, her parents Kha and Thai Bui, and siblings, Khanh (Khanh), Thuy, Thu (Tom), Nu (Mark) were sponsored by St. Williams Catholic Church in Walled Lake, MI. Empathy and support of this faith community was the key to the Bui family’s ability to transform from refugees who arrived with just the clothes on their backs to becoming contributing US citizens. After being in the U.S. for two years, her brother Paul (Jennifer) was born.

Trinh and her siblings started school in Walled Lake, knowing limited, if any, English. Her parents drilled the importance of education as the key to accessing the American Dream. While the children fought to assimilate and blend into the 99.9% white community of Walled Lake her parents held on to Vietnamese traditions. The main teaching instilled by her mom during this time was her love of cooking and expressing love through sharing food.

Trinh graduated in the top ten of her high school class and attended the University of Michigan from 1988-1992. In January of her last year at U of M, she met her future husband, partner in crime, and best friend, Daniel Lee Pifer, at the Nectarine ballroom. Trinh was accepted to the Peace Corps in Nepal shortly after and would leave in September 1992 for her two-year commitment. After her first year in Nepal filled with copious letters and the occasional phone call, Dan planned a month-long trip to visit Trinh in December 1993 which became the start of their future Pifer Nomads adventures and sense of wanderlust. During the visit, Dan proposed to Trinh, kneeling on the mud floor in her small apartment. They were married on July 1, 1995. That fall, Trinh started her studies at the U of M School of Public Health. In 1996, Maya Thi Pifer was born. Trinh graduated with her MPH degree in 1997 and was hired by the URREA now known as Arbor Research Collaborative for Health – a job in which she was able to fulfill some of her wanderlust and travel to conferences across the globe. In May 1998, Trinh and Dan bought a 10-acre parcel of land in Lima Township, and in October 1999, moved into the home they build with their own sweat and tears. After the house adventure, Leah Mae Pifer was born in 2000.

Life has a way of making us face new challenges. In 2003, Trinh was diagnosed with a rare blood condition. In 2005, she resigned from URREA and decided to start her own business in Chelsea where she could spend more time with her girls. She opened the Garden Mill in June, 2005. Trinh became a significant advocate and visionary for her community and small business. She helped to start the Chocolate Extravaganza and Wine, Women, and Shopping events. She was a member of the Garden Club as well as serving on a plethora of boards in the community such as Chelsea Center for the Arts, Chelsea First Steering Committee, Michigan Association of Senior Centers, Blueprint for Aging, and Chelsea Community Center Exploratory Committee. After selling the Garden Mill, Trinh became Executive Director to the Chelsea Senior Center from 2011 until 2019. During her tenure she was instrumental in building a senior nutrition program, and promoting the Intergenerational Garden to share her passion for food and gardening, as well as helping to establish the Grass Lake Senior Center. In 2019, she won the Chelsea Citizen of the Year award. Trinh felt she lived a full life surrounded by family and a community that loved her.

A funeral mass was held Saturday, July 10 at 11:00 am at St. Mary Catholic Church in Chelsea.  On Friday, July 16, The Chelsea Senior Center hosted a gathering to remember Trinh and share stories.

Click here to watch the video of Trihn's Celebration of Life at the Village Conference Center.

In lieu of flowers, memorial contributions may be made to Matthaei Botanical Gardens as a tribute gift in her name or to the Chelsea Senior Center.
Arrangements by Cole Funeral Chapel, Chelsea.

You may use the form below to share a memory or leave a message for Trinh's family.  Please allow up to 24 hours for us to review and post your comments.

12
#17 Kathi Lear 2021-07-16 14:07
Trinh was a beautiful soul and will be dearly missed. She certainly touched the lives of many people in her 51 years. May her memory live on and continue to effect change in others. Hugs to the Pifer family.
Quote
#16 Lynn Dils 2021-07-16 11:00
Deeply sorry to learn of Trinh's passing; may her memory be for a blessing and peace be with her loved ones.
Quote
#15 Pam Newbury 2021-07-11 08:59
Trihn brought out the best in people and her extraordinary enthusiasm, organizational skills and creativity will live on leaving the world a much better place.
It is my hope that Trinh's inspirational life story will become a literary gem in Chelsea, Michigan and beyond for young men and women to learn and grow from. I had the honor of getting to know Trihn through planning lunch time enrichment programs at the Senior Center. Her contributions to the community of Chelsea will never be forgotten. Heartfelt prayers to her beloved for their loss.
Quote
#14 Tim Merkel 2021-07-10 16:04
Trinh freely shared her fresh enthusiasm, energy, optimism, and intelligence with everyone. I am very sad for your and our communitys' loss.
Quote
#13 Sandra Shaw 2021-07-07 15:39
She was a sweet lady and was on a trip that I took. So got to know her a little while. So very nice!!! So sorry for her husband and children. A life cut short by illness. Will pray for comfort from my Heavenly Father.
Quote
#12 David Frame 2021-06-10 15:59
Dear Dan, I am So very sorry for your loss. Trinh was very special- a fighter, an organizer, an inquisitor, a positive person who was always looking ahead. My life has been touched by her and by your devotion to her in ways that will last with me forever. It has truly been a blessing to know Trinh, I pray for your peace!
Quote
#11 Anne Taylor 2021-06-10 11:51
Condolences to the family. She was a much admired woman by all who knew her.
Quote
#10 Patricia Cole 2021-06-10 01:19
To the Dan Pifer family,
Please accept my heartfelt condolences on the loss of your wife and mother. She was a strong confident woman whom I am certain fought until the last. She loved her family, friends and the community as a whole. May she Rest In Peace.
Quote
#9 Kathy 2021-06-10 00:56
My deepest condolences to Dan, Maya, Leah, and all those who loved Trinh. May she rest in peace.
Quote
#8 Dave Brinklow 2021-06-09 23:21
Dan, Maya, Leah, and Alexander Family,
So sorry for your loss.
Quote
12
Refresh comments list