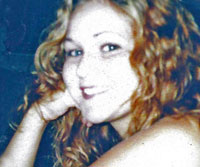 Of Jackson, Michigan, age 39, passed away Wednesday, May 12, 2021, at Henry Ford Hospital in Detroit, due to complications of Covid. She was born April 17, 1982, in Jackson, Michigan, the daughter of Thomas Richard Powers and Sue Alice (Hendrickson) Powers.

Jill graduated from Jackson Northwest High School in 2000, and then attended Jackson College. She worked in retail in the Jackson area and attended the St. John Catholic Church also in Jackson. Jill enjoyed dancing lessons when she was younger; she was artistic and funny.

Jill is survived by her mother, Sue; her children, Corrissa Frey and Liam Coyle both of Jackson; her brother, Thomas (Laurel) Powers of Rives Junction; and aunts, uncles and cousins. She was preceded in death by her father; all four grandparents; and very special cousin, Nathan Swartz.

A private burial will be held at St. John Catholic Cemetery in Jackson. Memorial contributions may be made to the Jackson Right to Life at 317 W. Washington St., Jackson, MI 49201, or jacksonforlife.org/donate. Arrangements were entrusted to Cole Funeral Chapel in Chelsea.

You may use the form below to share a memory or leave a message for Jill's family.  Please allow up to 24 hours for us to review and post your comments.