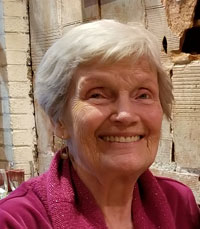 of Chelsea, Michigan, age 94, died Sunday, April 25, 2021 at Chelsea Retirement Community. She was born October 10, 1926 in Maple Shade, New Jersey, the daughter of Howard Evert & Edith Maria (Mitchell) O'Hara.  Edith has lived in Chelsea since 1973. She graduated from Morristown High School in New Jersey in 1944. While in high school, she enjoyed playing field hockey. She had nursing training from 1947-1949. Edith worked at Cooper Hospital, served in the US Navy from1951-1957, and the Navy Nursing Corps, where she traveled the world. She also worked at W. Jersey Hospital, Charleston Memorial Hospital, U of M Hospital, and U of M Health Services. Edith enjoyed golf, cross country skiing, and has walked many miles.

On December 28, 1957, she married William G. Moller Jr., and he survives. Other survivors include a daughter, Diane (Brian) Sikkenga of Texas; a son, William (Amanda) Moller of Chelsea; 1 niece; and 4 nephews. She was preceded in death by a sister, Jean Farnsworth.

Private graveside service with be held at North Lake Cemetery. Memorial contributions may be made to the Salvation Army, 100 Arbana Dr, Ann Arbor, MI  48103. Arrangements were entrusted to Cole Funeral Chapel.

You may use the form below to share a memory or leave a message for Edith's family.  Please allow up to 24 hours for us to review and post your message.

#1 Irene Kranick 2021-04-30 12:53
Edith was my neighbor and a wonderful friend. She was a very classy lady. My sincere condolences out to her husband, her son Bill and daughter Diane. I will miss her and our weekly phone chats.
Quote
Refresh comments list