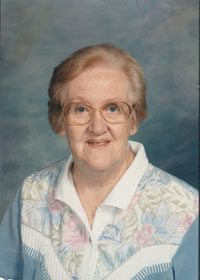 of South Range, MI, formerly of Ann Arbor, Pinckney, and Chelsea, age 101, died Thursday, April 15, 2021 at Canal View - Houghton County. She was born August 12, 1919 in Sault Ste. Marie, Michigan, the daughter of Herbert G. and Mabel (Fletcher) Lee. Doris moved to Ann Arbor in 1929 with her family. She graduated from Ann Arbor High in 1937. Her first job in those Depression years was at the Ann Arbor Public Library where she worked until 1941. She moved to a job at the U of M Main Campus where she worked as a Secretary and eventually as office supervisor in the Engineering Research Department Technical Reports office, where they prepared the Top Secret reports on the first research being conducted on atom smashing and nuclear fusion and the very first experimental bombs that were later developed into the atom bombs that were used to end World War II.

Doris married Albert J. Sannes, an Air Force Veteran, on October 9, 1948, at the First Baptist Church in Ann Arbor where Doris had been a member of the choir from 1938 to 1948. They lived in Ann Arbor until 1953 when they moved to a home at Hi-Land Lake near Pinckney, Michigan. Doris was a member of the Pinckney Library Board and member of the Congregational Church in Pinckney. The family later moved to Chelsea, Michigan in 1964 where her husband was working at the Chrysler Proving Grounds from 1950-1980.

When all three of their children were in school, Doris took a part-time job at the McKune Memorial Library. She also took classes in medical transcribing and eventually took a job as a Medical Records Transcriptionist at the Chelsea Medical Center, where she worked until 1976. She moved to a job as Medical Secretary for Dr. Reed O. Dingman, a plastic surgeon in Ann Arbor, and worked there until Albert took his retirement from Chrysler Proving Grounds and they moved to Florida. When Albert passed away in 1984, Doris moved back to Michigan to be closer to her family.

A public visitation will be held on Tuesday, April 20th. Please call the funeral home at 734-475-1551 to schedule a time to pay your respects. Funeral services will be held Tuesday, April 20, at Cole Funeral Chapel. Because attendance will be limited due to COVID restrictions, a video of her service will be posted on the funeral home website as soon as possible. Burial will be at Oak Grove Cemetery in Chelsea, Michigan. Memorial contributions may be made to the First Congregational Church of Chelsea.

You may use the form below to share a memory or leave a message for Doris' family.  Please allow up to 24 hours for us to review and post your message.

#7 Dave Murphy 2021-04-21 05:10
Two good friends Doris and Al were, Al enjoyed bowling against me I was so easy to beat. Doris would smile and say better luck next time Murph, although she knew what the results were going to be. Good memories
Quote
#6 Dr. Barbara Edema 2021-04-20 12:47
Visiting Doris was always a treat! She kindly shared the stories of her life (very exciting, especially her work in the Engineering Research Department Technical Reports office). She always wanted to hear the news happening at FCC. Doris was a treasure! God bless.
Quote
#5 Arly Spink 2021-04-19 19:32
I remember Doris as a very sweet person and it was so nice that she kept in touch with the church in Chelsea even when she moved to Houghton. Blessings to your family for a dear lady and a life well-lived.
Former Clerk of First Congregational Church of Chelsea (FCC)
Arly Spink
Quote
#4 Teri MacDonald 2021-04-17 15:53
Laurie, Kathy, Charlie and families our condolences from the MacDonald family. Very fond memories of your entire family. We were so fortunate to be neighbors twice. God Bless.
Quote
#3 John MacGregor 2021-04-17 12:22
I remember the AAM picnics which all the kids and the train. Peggy and I brought my mom and Chunk and Miriam would bring his young mom Doris.
Quote
#2 Larry Lounds 2021-04-17 08:39
I have very fond memories of our summer visits at Hi-Land Lake. Aunt Doris will always be fondly remembered.
Quote
#1 Debbie Lounds-Bowers 2021-04-16 13:55
Aunt Doris has some very special memories in my heart from my childhood. Amazing, caring and loving person. I am so honored that I had her in my life
Quote
Refresh comments list