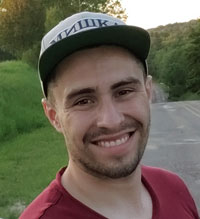 We mourn the loss of our beloved son, brother, grandson, nephew, cousin and dear friend, Robert Orlando Alvarez Hughes, who died Sunday, January 31, 2021, at the age of 26. Born October 5, 1994 in Ann Arbor, Michigan, Robert was the son of Laura Josefina Alvarez and Bret Anthony Hughes and brother to Gregory Luis Hughes. Robert’s smile, love of people and positive energy will be greatly missed. He was a truly kind soul; his bright smile was matched by a sparkle in his eyes, prompting his family to call him "Sparky." Throughout his life, including as a young child, he loved to be around people, particularly among his large extended family. He was proud of his Venezuelan heritage and was known by many as "Roberto." Despite great physical distance, he maintained close bonds with his extended family members, some of whom stayed at the Hughes house for months at a time.

In his short life, Robert traveled extensively with his parents and brother to spend holidays with the Alvarez family in Venezuela and Hughes family in the San Francisco Bay Area. He also enjoyed reunions with both family branches in a host of countries in the Americas and Europe. He was fortunate to travel to destinations such as Aruba, Brazil, Canada, Curaçao, Colombia, Ecuador, Mexico, Panama, St. John, Venezuela, Alaska, Colorado, Hawaii, Maine, Montana, New York, Washington, Wyoming, Denmark, England, France, Scotland and Spain.

Robert loved the outdoors and hiking. As a child, he spent summers at YMCA, Blue Lake, and soccer camps. In 2016 he attended Outward Bound in Colorado, the Florida Keys and Brazil and through this experience he had the opportunity to be outside as well as gain leadership skills, restore trails and assist with the construction of a house for a Brazilian family.

Robert was a natural athlete and took part in many outdoor activities such as soccer, mountain biking, and cross-country skiing. As a child he taught himself snowboarding, hiking up the hills behind his house to enjoy the ride down. At ski resorts, he flew down the black diamond runs with impressive skills and strength. Robert had a strong work ethic and entrepreneurial spirit; while completing his degree in Business Administration at Eastern Michigan University, he worked several jobs and pursued his interest in the visual arts (which started with videos of his friends’ skateboarding tricks in middle school) by producing music videos of local artists.

A kind and caring person, he befriended many people and touched the lives of all who knew him. He deeply cared about other people, especially those less fortunate. He always opened his wallet to help others in need on the sidewalk or at freeway exits. We will miss Robert, a beautiful and vibrant person whose smile lit every room he entered.

Private funeral services were held on February 4th at Cole Funeral Chapel, with Deacon Wayne Slomiany officiating. A Mass for Robert was held in Laura’s hometown of San Cristobal, Venezuela. We will have a private celebration of life to honor our beloved Robert in the future. Memorial donations may be made in Robert's name to the Hurricane Island Outward Bound School (www.hiobs.org), Habitat for Humanity Huron Valley (www.h4h.org), or a charity of your choice.

You may use the form below to share a memory or leave a message for Robert's family.  Please allow up to 24 hours for us to review and post your comments.

123456
#55 Marco Acosta 2021-04-16 19:02
Robert was a close friend for 13 thirteen years. He was a man of loyalty, charisma, and adventure. It saddens me deeply that his bright future came to an end. Throughout the pandemic, Robert and I had long phone conversations about his future aspirations—he had so much drive and passion to become a successful entrepreneur. I will never forget our outdoor adventures on bikes, skateboards, and snowboards. Growing up, he always had my back and looked out for me; I will always cherish him for that. My deepest condolences and prayers to the Hughes family.
God bless.
Quote
#54 Rachail &Rick laine 2021-04-16 18:13
Robert can’t believe you are not with us , we will always remember your beautiful smile and spirit , we saw how you grow from a kid to be a nice young man , you will always be in our thoughts and our heart, we promis to be there for your family.
Quote
#53 Christine Hughes 2021-04-16 07:20
I already miss Robert so much, knowing that I won’t see him again leaves a big hole in my family’s heart, and I’m sure many others. Many of my cousins and I called him Tito and what I’ll remember most about him is his silliness. He made everything light and fun; always had a big smile; always engaging the people around him. Tito, I miss you, love you and wish I could give you a big hug one more time.
Quote
#52 Vincent Mejia 2021-04-13 12:31
Laura and Bret and Gregory and All the Alvarez/Hughes Family. My condolences. Accompany you forward, stay strong and let the memories of Roberto warm your hearts. With sincere hope you All are well. God Bless.ur
Quote
#51 Lisa Curry Austin 2021-04-12 00:09
I never had the pleasure to meet Robertito. This tribute introduced me to a very amazing and distinguished young gentleman. I do know and love Bret & Laura, and I have always had a great respect for the entire Hughes family.

Laura and Bret, please feel the love that I am sending and let my spirit of compassion surround and comfort you. You have been available to me through the years and I thank you. I am here for you and will travel this road by your side.
Will much love, Lisa
Quote
#50 Anna Centofanti 2021-04-11 21:03
Mike and I are deeply saddened to hear about Robert. Robert lived next door to us and grew up with our sons. I recall Robert coming over to our house many times and he was such an energetic and charismatic person. I knew his friendship with our boys was the real deal and I was very happy they had Robert around. The boys got along so well and experienced so many things together, so many memories to be had. There were many spring and summer days all of them would be skate boarding in the driveway or running around the trails in the woods together. Winter was full of snowboarding, sledding, and snowman building. Our memories of Robert will be with us always, as he was so kind, respectful, and a joy to have over. Our hearts break for all who loved him. Rest in peace Robert.
Quote
#49 Austin Centofanti 2021-04-11 17:48
I have many amazing memories with Robert from our childhood. We played video games, skateboarded, went snowboarding, swimming, rode bikes, and played in the woods between our houses. There never was a dull moment being with Robert. He always could find a way to make you laugh and put a smile on your face. He has left an impression on my life and so many others. I will always cherish the friendship we had.
You will forever be in our thoughts.
Quote
#48 Kent Hughes 2021-04-10 17:14
I recall the San Diego family reunion: Robert with his arm around cousin Evan in Old Town, swimming in the Pacific, and playing football as sun went down.

I last saw Robert at dinner in Chelsea in late 2019 We talked bout Robert’s plans activities, and dreams. Robert was always optimistic, and this time only reinforced his positive expectations. Maybe someday he'd move to California? (always a dream of mine to have him here).

As we drove up to his apartment and dropped him off, I wanted him to know how much I cared for him and said, "I love you, Dude."

I will always remember Robert's cheery outlook. His enthusiasm to join any activity. His broad smile. The way he'd put it all together with beaming, "Yeah!" - his way to let you know he was eagerly behind you.

I love you and miss you so much, Robert. Your kind and gentle soul, plus your zest for life was taken too soon from this world.

Love,
Uncle Kent
Quote
#47 Craig Centofanti 2021-04-08 20:52
Robert was my neighbor growing up so we naturally spent a lot of time together. We would spend hours outside playing at each others houses or in the woods around our house. We built some awesome forts together and would go swimming in the lake by our houses. I have memories with Robert while growing up that I will never forget. Robert always had a smile on his face and could make anyone laugh. He was always looking for an adventure and very passionate about his interests. I remember showing Robert my first skateboard and he fell in love with it and skated almost every day and achieved a skill level that many don't. Robert cared tremendously for his friends and family and would always lend a hand to anyone in need. He used to give me rides to school after he got his license so i didn't have to ride the bus which was one of the many kind gestures Robert would do. Robert has left any ever lasting impression on my life and many others'. Rest easy Robbie I will always cherish our friendship
Quote
#46 Lucy Yuan 2021-04-08 00:52
Robert was my birthday buddy from day 1 and someone who always had a welcoming kind smile, that I can still picture even after many years. I look back fondly on those fall holiday gatherings, where you and Gregory would help us escape from the adult dinner crowd to explore your backyard woods. I always looked forward to our outdoor adventures and it was always cool to hear snippets of your travels. Thank you for sharing your friendship and kindness with me, you will be missed. Sending my prayers and hugs to your family.
Quote
123456
Refresh comments list