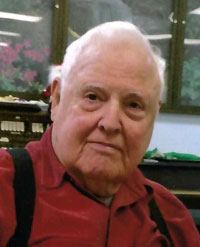 of Jackson, MI, formerly of Chelsea and Lansing, age 86, died Monday, February 15, 2021 at Henry Ford Allegiance in Jackson. He was born July 25, 1934 in Mattawan, MI, the son of Samuel I. & Mildred (Anson) Alguire.  Sam graduated from Plainwell High School in 1952, and earned his Bachelor’s and Master's Degrees in Geology at Michigan State University. He worked for the State of Michigan for 40 years supervising drilling for oil and gas, mostly in Albion, St. Clair, Macomb, and Hillsdale Counties, retiring in 1996. Sam was an active member of the Mount Hope United Methodist Church in Lansing, and of the First United Methodist Church in Chelsea.  In his retirement, he volunteered in the church tape ministry, and teaching refugee families how to drive. He was a member of the Michigan Basin Geological Society and the American Association of Petroleum Geologists. Sam was also part of Alzheimer's groups in Lansing and in Ann Arbor.
On July 22, 1961, Sam married Nancy Evelyn Sanborn in Hubbardston, MI, and she survives. He is also survived by two daughters, Sara Alguire of Haslett, and Linda (Robert) Alguire-Culver of Canton; a grandson, Brogan Samuel Winter; and niece, Martha Turner. He was preceded in death by three brothers and three sisters.
A memorial service will be held at a later date.  Burial will be at East Plains Cemetery in Hubbardston, Michigan. Memorial contributions may be made to the Alzheimer’s Association or Mt. Hope United Methodist Church in Lansing. Arrangements by Cole Funeral Chapel in Chelsea.
You may use the form below to share a memory or leave a message for Samuel's family.  Please allow up to 24 hours for us to review and post your comment.

#1 Gene & Karol Sanborn 2021-02-18 17:15
Ever accomplished, loving, giving and welcoming man. We love Uncle Sam and will cherish the memories made of good times spent with he and Aunt Nancy.
Quote
Refresh comments list