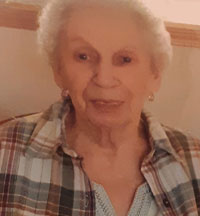 of Jackson, MI, age 90, died Monday, December 14, 2020, at Jackson County Medical Care Facility . She was born May 14, 1930, in Norvell, Michigan, the daughter of Everett & Adeline Agnes (Schneidenbach) Moore.  Shirley graduated from Chelsea High School in 1948. She was mother to seven children. She worked for Marzon Electric and Ruhland Electric in Howell. Shirley was a former member of Zion Lutheran Church.

No public services are planned. Memorial contributions may be made to a hospice of your choice. Arrangements were entrusted to Cole Funeral Chapel in Chelsea.

You may share a memory or leave a message for Shirley's family using the form below. Please allow up to 24 hours for us to review and post your comments.