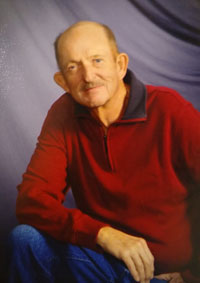 Of Chelsea, Michigan, age 76, transitioned to Heaven on Saturday, November 28, 2020 at St. Joseph Mercy Hospital in Chelsea. He was born January 3, 1944 in Hillsdale, MI, the son of Richard Arthur and Ethel Marie (Sanders) Smith. He had two sisters, Diane Wieland who preceded him in death, and Janet Ward, who survives.

Dicky graduated from Jackson High School in 1962. During his working life, he had various jobs, but Dicky was most proud of his career at Chrysler Proving Grounds. Dicky started that career in 1972 at various positions until he landed at the wind tunnel team as driver/mechanic. He proudly honored that position until his retirement in 2002, with the knowledge of a job well done. He became a member of the First Congregational Church of Chelsea in 1999 and always had a smile and a handshake. He was most proud of his role as head of building and grounds. He loved working with the youth on mission trips, showing his talent, wisdom and teaching the value of hard work, always with a smile and a wink.

Dicky volunteered at Chelsea Community Hospital as a shuttle driver. He was President of Sylvan Hills Estates property owners association. He designed and built the home he and Linda have resided in since 1988. He built with pride a ’32 Ford and just finished a ’41 Plymouth. He enjoyed being a car guy, woodworking, fishing, 60's music, word finds, along with keeping his lawn immaculate. Dicky's family and friends were incredibly important to him. His positive spirit and engaging wit improved the lives of people around him.

On December 27, 1975, he met the love of his life - his soul-mate, Linda and eight months later they were married on August 21, 1976 at the Arbor Grove Congregational Church in Jackson. Dicky and Linda, with only determination and a force of unbelievable love, became a family with 5 children, 4 girls and 1 boy who ranged in ages of 12, 11, 10, 9, and 6 years old. That union created a wonderful family. Survivors include his wife, Linda, with 44 years of marriage; Shelley (Neal) Young of Oklahoma, Patti (Gar) Deyoe of Chelsea, Charles “Chuck” Garrison Jr. of Rapid City, Lori (Bobby) Hall of Jackson, Cindy (Dennis) Hoffman of Cement City, 14 grandchildren, Stacey (Scott), Stephanie (Kevin), Jennifer (Aaron), Christopher (Deanna), Trey (Kaitlyn), Amee (Chase), Janie (Cody), Morgan, Ashley, Olivia, Chelsey, Cameron, Collin and Sam. 14 great-grandchildren, Lyla, Elsie, June, Gabriel, Noah, Christopher, Hannah, Haley, Kaylee, Brendan, Kayden, Tucker, Callie and Bricen. We give heart-filled gratitude to Linda’s sister, Jeanine Lasovage; and a special thank you to Dr. Rebecca Patrias, Dr. Edward Kreske, and all of Dicky’s health care team of many years.

A graveside service will be held Thursday, December 3, 1:00 pm, at Oak Grove East Cemetery, with Pastor Joe Jeffreys officiating. In lieu of flowers, memorial contributions may be made to First Congregational Church, St. Joseph Mercy Chelsea ICU, or the Chelsea Area Fire Authority. Arrangements were entrusted to Cole Funeral Chapel.

You may use the form below to share a memory or leave a public message for Dick's family. Please allow 24 hours for us to review and post your comment.