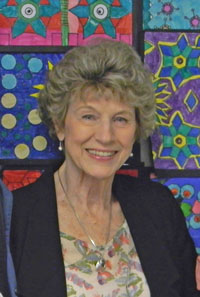 Of Dexter, MI. Shirley died peacefully at age 83, on Sunday, November 22, 2020 after succumbing to the inevitable progression of Lewy body dementia. Her husband of 17 years, Jim Buschmann, was at her bedside as she passed away. Shirley was born July 15, 1937 and raised in Milan, MI, the daughter of Dana McKinley and Frieda J. (Wendt) Sampier. She graduated from Lincoln High School and then from Eastern Michigan University with a degree in teaching. Shirley taught on and off for years in Grand Haven, Ypsilanti and surrounding towns. She also held business manager positions with several enterprises in Western Michigan.

In Dixboro, a suburb of Ann Arbor where she raised her three children, Shirley was a PTA parent, room mom, and a 4-H, Boy Scout and Girl Scout supporter. She actively enjoyed summers on the shores of Lake Michigan with her children and the many others that ran the beach and dunes with them. Later in life she and Jim discovered the magic of summers in the Keweenaw Peninsula, camping there for many years and mushrooming while traveling to and from. Closer to home, she was the neighborhood mom who delighted in watching her backyard transformed into the welcoming meeting place for children and adults, alike. Shirley’s “finger whistle” was well known throughout the neighborhood as the signal to her children that it was time to come home. She loved her children, her grandchildren, family and extended family and cherished her time together with all of them. Shirley also was an animal lover, doting on her own pets – most recently her cats, Opal, Onyx and Oreo – and supporting efforts to care for abandoned dogs and cats.

She knew how to throw a party – both large and small, entertaining many, many people in her lifetime. She lived for football parties (University of Michigan games, in particular), summer beach parties, regattas, and all manner of birthday celebrations. But what Shirley loved the most was Christmas. And boy did she know how to celebrate the holidays. Every year a big, fresh-cut tree, homemade tree skirts, hand-knit stockings for the family, decorations inside and out, baking – endless baking – family games, delicious snacks, fine meals on the “good china.” And presents. Each purchased throughout the year for every family member and her many friends with love and thoughtful consideration. Because that is what Christmas was to her, a constant celebration of everything that meant family.

Shirley is survived by her husband Jim; her children: LeAnne Redick Wilson of Alexandria, VA; Gay Lynn Cookson of Sandy, UT; Ron Redick (Wendy) of Grand Haven, MI; and one brother, Richard Sampier of Ypsilanti, MI; six grandchildren, and many nieces and nephews and others who called her Grandma and Aunt. She was preceded in death by her parents, four brothers and one sister. She was divorced from her first husband, Ron Redick.

We will honor her spirit this holiday season and throughout the coming years. Due to Covid, a celebration of Shirley’s life will take place in summer 2021. Donations in her memory can be made to Eastern Michigan University's EMU Foundation. Arrangements by Cole Funeral Chapel, Chelsea.

You may share a memory or leave a message for the family by using the form below. Please allow up to 24 hours for us to review and post your comment.