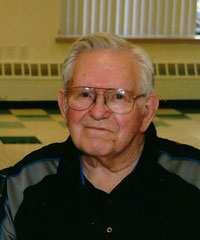 of Jackson, Michigan, age 87, died Monday, October 5, 2020 at Arbor Manor in Spring Arbor, MI. He was born July 8, 1933 in Deerfield MI to Irvin and Pearl (Weber) Fraker. He was preceded in death by his parents, one sister Doris, two brothers Warren and Calvin, and a step-sister, Gwen (Dave) Blackmer.

Marv graduated from Ann Arbor High School in 1952. He was All-State in both football and wrestling. This earned him an athletic scholarship to Michigan State University where he played football for one season. After one semester at Michigan State University, he decided to return home to become a plumber. He received his journeyman’s plumbing license in 1957 and his Master plumbing license in 1970. Marv owned Fraker Plumbing Inc. from 1971-1985. He was a member of Plumbers/Pipefitters UA Local 190 for over 66 years.

Marv was strong as a bull, but gentle as a lamb. Marv was very active in his church. He was a trustee on the church board for many years at the Southwest Church of the Nazarene in Gregory MI. He was also the general contractor for his church, its parsonage and years later an addition to the church. If a job needed to be done at his church, he did it. He was awarded the Distinguished Service Award by his church. Highlights of his life were his family, especially his grandchildren, great-grandchildren and serving his Lord.

Funeral services will be held Friday, Oct. 9, 2020 at the Chelsea Church of the Nazarene, 12126 Jackson Rd, Dexter Twp, MI 48130 with the burial following at Washtenong Memorial Park in Ann Arbor. A viewing will be held Thursday, Oct. 8 at Cole Funeral Chapel, 214 E. Middle St. Chelsea, MI. 48118. Due to COVID restrictions, please call Cole Funeral Chapel at 734-475-1551 to schedule a time for viewing or reserve a spot at the funeral. Donations may be made to SouthWest Church of the Nazarene, 14555 Holmes Road, Gregory, MI 48137.

You may use the form below to share a memory or send a public message with Marv's family.  Please allow up to 24 hours for us to review and post your comments.

#3 Steve Bringardner 2020-10-08 16:55
Marv Fraker was the kind of guy every pastor wishes he had in his congregation. Strong, lovable, fun (and funny). . .a real work-horse when it came to getting things done. He and Bea were among the first faces I saw when I came to pastor University Church of the Nazarene back in the 70's. An instant friendship formed; and our families will always be bonded in God's love.
Quote
#2 Derek Hewitt 2020-10-08 08:53
Although I didn't know your Dad, I heard many stories about the Fraker boys and their East Ann Arbor exploits from my day Bob who was good friends with both Marv and Cal. I send my deepest condolences.
Quote
#1 Marv Fraker 2020-10-07 13:36
So very sorry for the loss of your beloved father. You are in my thoughts and prayer.