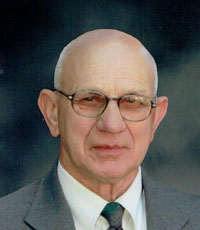 of Grass Lake, MI, age 90, died Friday, September 11, 2020 at his home in Grass Lake. He was born September 16, 1929 in Davenport, Iowa, the son of Rudolph Henry & Edna Elinor (Hein) Ahrens.  Gene joined the US Army in September, 1947, and was a Medical Tech in the 8th Army, 24th Infantry, being stationed in Korea, Japan, Germany as well as Fort Knox, TN; Camp Kilmer, NJ; Fort Riley, KS and Fort Wayne in Detroit until 1953. Gene stayed in the Detroit area working for several different concrete companies. He was a medical tech at the Ford Rouge plant & head of production control at Hoskins Manufacturing Co. Gene and his family moved to Chelsea in 1969. He was a member of the Herbert J. McKune Post 31 of the American Legion. Gene was also a Iowa Hawkeyes fan. He coached little league in Chelsea for several years and was a Scoutmaster.

The family would like to thank the Henry Ford Allegiance Hospice & Our Family Friend Homecare.

The family will receive friends at Cole Funeral Chapel Monday, September 14. Please call the funeral home at 734-475-1551 to schedule a time to pay your respects. Private graveside services will be held Tuesday, September 15, at Mt. Hope Cemetery in Waterloo. In lieu of flowers, memorial contributions may be made to Herbert J. McKune Post of the American Legion, PO Box 293, Chelsea, Mi. 48118 or Cascades Humane Society,1515 Carmen Dr, Jackson, MI 49202.

You may use the form below to share a memory or leave a public message for Gene's family.  Please allow up to 24 hours for us to review and post your message.