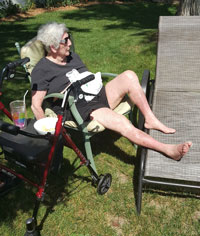 Of Jackson, Michigan, formerly of Chelsea MI and Sarasota FL. Age 95, died September 5, 2020 at Hospice House in Jackson, MI, with her daughter by her side.  She now resides in the house of her Lord and Savior.  She was born April 8, 1925 in Buffalo, New York, the daughter of Harold & Elizabeth (Spangenburg) Roth.

Geri loved fashion and shopping. She was shy until she got to know someone. Geri enjoyed her years at Weber’s Restaurant as a cashier. She and Guy owned two motels in Sarasota FL. Geri engaged with her guests, many of whom became friends and returned every year. Sunshine and the beach were things she liked very much. Geri enjoyed the old hymns and scripture and attending church services with family and friends.

You may  share a memory or leave a private message for Geri's family by using the form below.  Please allow up to 24 hours for us to review and post your comment.

#1 Sandy Ball- Jenkins 2020-09-07 16:38
Marcia, Trevor and family, I'm so sorry to hear of Geri's passing. I remember her being a spunky lady that seemed to love life. Please take comfort that she is at home with her Lord and savior with a new body. Please let me know if you need anything.
Love,
Sandy
Quote
Refresh comments list