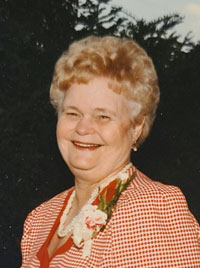 of Ann Arbor, Michigan, age 92, died Friday, September 4, 2020 at her home. She was born March 4, 1928 in Flat Rock, MI, the daughter of Harry Christian & Alice L. (Osmun) Anderson.  Patricia attended Flat Rock High School, where she enjoyed playing basketball. She lived in many different areas, including Iowa, Grayling, in a remote area near Mio, Dexter, and finally Ann Arbor. Pat worked at Head Start in Dexter, and later at TJ Max, JC Penney, Meijer (all in Ann Arbor). She attended Dexter Gospel Church.

You may share a memory or leave a message for Pat's family using the form below.  Please allow up to 24 hours for us to review and post your comments.

#1 Diane McGee 2020-09-04 18:34
My Grandma was one of a kind . The love and compassion she always showed to us was simply the best . I can honestly say I don't think I have ever seen her angry or mad . Her laugh was the best laugh My heart aches because I lost my favorite grandma . But then my heart is also happy to know she is reunited with my grandpa her son and parents . I will for ever Love you Gram .
Quote
Refresh comments list