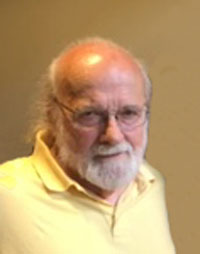 Vladimir graduated in 1959 from University High School in Ann Arbor, and attended several colleges. He was a tool and die maker, first for his dad, then for Boos Products in Gregory. He also delivered the Ann Arbor News from 1985 until his death. Vlad liked to read and do word search puzzles.

On January 5, 1982, he married Norine Lillian Grumelot at Stockbridge Presbyterian Church, and she survives. He is also survived by his children, Mara Andrea (Danny) Weber of Johnston City, IL, and Alexander Marc Bibicoff of Tucson, AZ; a sister, Xenia Valerie Coulter of CT; three grandchildren, Chase Fienhold of Las Vegas, Brandon Fienhold and Lily Fienhold of Johnson City, IL; and many nieces and nephews. He was preceded in death by his first wife, Marell in 1975; and his parents.

No services are planned at this time. Memorial contributions may be made to the American Heart Association. Arrangements by Cole Funeral Chapel, Chelsea.

You may use the form below to share a memory or leave a public message for Vladimir's family. Please allow 24 hours for us to review and post your comment.