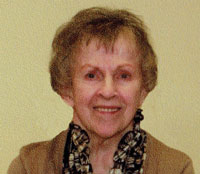 Barbara attended Chelsea schools and was a runner in high school. She worked at Gaunt's gladiola farm, and did childcare. Barbara was a member of the First United Methodist Church in Chelsea. She was an artist who loved to paint and draw.

On Nov. 22, 1950, She married Douglas F. Egeler in Angola, Indiana, and he preceded her in death on July 27, 2012. Survivors include her son, Douglas A. (Sandra) Egeler of Chelsea; three grandchildren, Derek Egeler, Adam Egeler, and Mandie (Zach) Porter; 2 great-grandchildren, Carter Porter, Abbie Jean Porter, and a 3rd on the way; a sister, Mary (Eugene) Alber. Barb was preceded in death by one son, Richard Egeler, her brother, Robert James Weir, and her sister, Jacqueline Riethmiller; and several nieces and nephews.

Burial will take place at Oak Grove East Cemetery, Chelsea, Michigan. Memorial contributions may be made to Pura Syndrome Foundation.

You can use the form below to share a memory or leave a public message for Barbara's family.  Please allow up to 24 hours for us to review and post your comments.