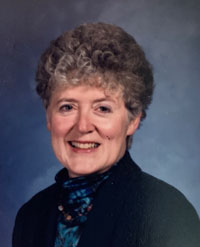 Aged 89, died peacefully of natural causes on Mother’s Day, May 10, 2020, with her family nearby in her apartment in the Silver Maples of Chelsea Retirement Neighborhood in Chelsea, MI. Born May 12, 1930, in Evanston, IL, to Charles Sledge Kent and Irene Isabella Schuler Kent, Rosemary spent her early years in Maine before the family moved to lower Michigan. She was a 1948 graduate of Pioneer High School in Ann Arbor, MI, and graduated from Western Michigan University in 1951 with majors in English and Education. She met the love of her life, Robert B. Glenn, in a Shakespeare class. They wed in 1950 and shared 68 years of a very happy, successful, and busy marriage.

Rosemary’s teaching salary paid the couple’s rent and tuition as Robert pursued a career in higher education in the early years of their marriage. One of her most notable posts was at the Popkins School, a one-room school house in Ann Arbor where she taught six grades from 1954 to 1956. In 1957, she became a full-time mother, raising three daughters: Tama Delne, Minde Char, and Deri Sabra.

The Glenn family made several moves to accommodate Robert’s various teaching and administrative positions, ultimately settling in Marquette, MI, home to Northern Michigan University. Rosemary continued to steward the family finances, and her savvy management allowed Robert to pursue his joy in sailing and ensured their children completed college with minimal debt. During their 41 years in the Upper Peninsula, she and Robert were deeply involved in the life and worship of the First Presbyterian Church, became avid sailors and renowned members of the dance cotillion, arduously supported local artisan and musicians, and served as faithful volunteers of many civic and philanthropic causes to benefit the community they loved. Rosemary served as a city commissioner, a classical community chorister, and helped found the League of Women Voters chapter in Marquette. Upon retirement, Rosemary and Robert discovered the joy of travel, using their passports to explore widely, but returning most frequently to their favorite wintertime destination, Hawaii. 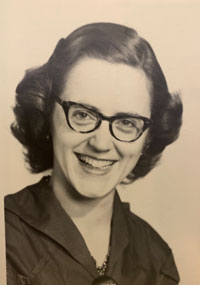 Rosemary had a deep passion for art, and developed skills in many media, including hooking rugs, painting, and quilting. She explored many avenues to learn new techniques, including taking all possible art classes offered at Northern. She was a prolific artist and art collector, and a member of every quilting club imaginable.

Robert and Rosemary moved to Silver Maples in Chelsea in 2013, bringing their art collection with them. Rosemary enjoyed following numerous Michigan university sports, attending Detroit Symphony Orchestra concerts, patronizing the Detroit Institute of Arts, and was an active member of the Silver Maples community. She delighted in singing with the Silver Maples choir, attending movie afternoons and fitness classes, participating on the art committee and hospitality club, and dining regularly with dear friends.

Rosemary was preceded in death by her parents, her husband Robert, her daughter Minde, and her brother-in-law William Thompson. She is survived by her sister Charlene (William) Thompson, her daughters Tama (Andrew) Abel and Deri (David) Gray, and her granddaughters Ashley and Sarah.

Please check back for information about Rosemary's memorial Service (which will be held at a later date).