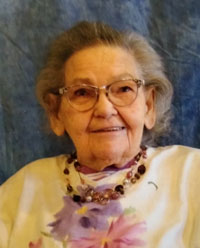 Of Ann Arbor, Michigan, formerly of Whitmore Lake & Mancelona. Age 95, died Thursday, April 30, 2020 at Brookdale Senior Living in Ann Arbor. She was born January 10, 1925 in Ann Arbor, Michigan, the daughter of Frederick & Daisy (Edwards) Altenbernt.   Katherine worked at Dapco in Dexter, Ulrich's Bookstore in Ann Arbor, the IGA in Dexter, and she also cleaned houses. She was a member of the Dexter Seniors and was part of several card game groups with the Chelsea Seniors. Katherine enjoyed sewing and gardening; and drove a lot as she liked to travel and go camping with her family.