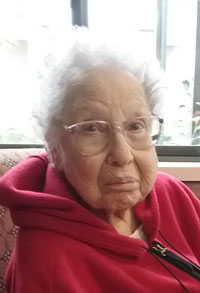 of Chelsea, Michigan, age 98; died Monday April 27, 2020, at Chelsea Retirement Community.  She was born December 23, 1921, in Hempstead, New York, the daughter of Morris & Gertrude (Silberstein) Joseph.  Elaine was raised on Long Island, New York.  She graduated from her all-girls high school as Valedictorian at age 15 1/2, enrolled briefly at City College of New York, and then moved to Washington, DC, at age 19.  There, Elaine attended George Washington University, earning a degree in Accounting.  On July 10, 1943, she married fellow GW grad Stuart Bonwit.
In latter years, Elaine became a computer analyst, working for the Federal Government for more than 20 years. She and Stuart lived in Silver Spring, Maryland, for 60 years, where they raised their children, before moving to Chelsea in 2010.  Elaine played tennis into her 70’s, and enjoyed her “adopted” shelter dogs into her 80’s.  She was very devoted to her family.
Stuart preceded Elaine in death in 2016.  She is survived by her two daughters:  Karen (Mark) Slutsky of Natick, MA, and Judy (Bill) Brown of Dexter; three grand-children:  Simon (fiancee Mollie) Slutsky, Deborah (Ben) Sherwin, Dan (fiancee Danielle) Blethen; and two great-grandsons: David and Oren.  She was preceded in death by her older sister, Marion Schoen.
A memorial service will be held at a later date. Memorial contributions may be made to Chelsea Retirement Community to be used for the staff.  Arrangements by Cole Funeral Chapel.
You may share a memory or leave a public message for Elaine's family using the form below.  Please allow up to 24 hours for us to review and post your message.