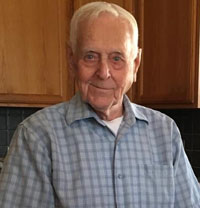 of Gibraltar, Michigan, age 91, who was always sensational but modest, went home to be with Jesus on Saturday, April 11, 2020. He was born February 20, 1929 in Hazel Park, MI, the son of Robert and Nora (MacKenzie) Payne. Stanley served in the U.S. Navy, and the U.S. Air Force during the Korean War, where he was deployed for many years. He married his bride, Juanita (McPherson) on March 23, 1956, and they shared a storybook love for 63+ years. Stanley retired from Western Electric in Plymouth, MI. After his retirement, he continued to keep himself busy at Don Massey Cadillac, and Bally Total Fitness, where he always brought a smile to the face of his many co-workers.

“D” would want all his loved ones “to keep smiling, kid, and remember to let it ring twice.”

You may share a memory or leave a public message for Stanley's family using the form below.  Please allow up to 24 hours to allow us to review and post your comments.

#6 Cindy Lucksted 2020-04-18 19:49
I will always be thankful for that day we were finally able to come together. I will cherish those memories for many years to come. Meeting you and your beautiful wife and your family means so much. I’m truly sorry that we never had the opportunity to share more of our lives with one another. I’ve been blessed with those special memories of you and your beautiful family. You will truly be missed by your children and grandchildren but I know your in a better place now with your beautiful wife. RIP Uncle Stan
Quote
#5 Daisy McPherson 2020-04-16 14:59
A man who loved his country and devoted to his Family! Rest In Peace Uncle Stanley! Love to All!
Quote
#4 Rich Marken 2020-04-15 20:37
Mike/Kevin and family my thoughts and prayers go out to you your mom and family. My the lord bless and keep you all in his good grace as you mourn the loss of your dad

Love you all
Quote
#3 Amy Pomponio 2020-04-15 18:00
I'm sorry for your loss. I know he loved his family immensely and they will miss him.
Quote
#2 Nick & SandyPomponio 2020-04-15 17:05
our deepest condolences to Stanley’s family. Losing a loved one is alway extremely hard, but add to that the fact that it happens during a terrible time for the world when your family cannot be around you, like they wanted to be, is probably the hardest thing that happened! Just know that he understood and wants you all yo know that he loved you all very much snd is happy now in the company if his wife. I am sure he will continue to look down on all of his kids an grand kids!
Quote
#1 David Radionoff 2020-04-15 15:25
Can still hear his voice and see him standing at the dock after a tournament and shaking his head at our sign of 1 fish. Many other fund memories that cant be shared. You will be missed and every time I remember you it will be with a big smile on my face and a chuckle
Quote
Refresh comments list