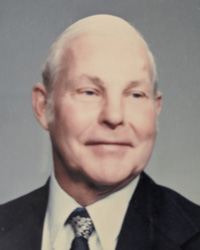 Fred grew up in Ann Arbor and graduated from Ann Arbor High School in 1946. He served in the US Merchant Marines, Michigan Air National Guard, and US Air Force. Fred retired from the Detroit Edison in 1990, following a 31-year career in appliance repair and customer service.

Fred designed and built his family’s home on Dexter-Ann Arbor Road in 1960. He and Bonnie lived there happily until moving to Silver Maples in 2015. Over the years, Fred spent many happy hours at home, working in the yard, extensive gardens, and his workshop.

A memorial service will be planned for later this year. Memorial contributions may be made to the Humane Society of Huron Valley in Ann Arbor. Arrangements were entrusted to Cole Funeral Chapel.