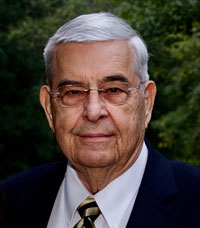 of Chelsea, Michigan, formerly of Bloomington, MN, age 91, died Saturday, April 4, 2020 at the Chelsea Retirement Community. He was born January 21, 1929 in St. Paul, MN, the son of Edwin B. & Helen (Larkey) Johnson.   Kenneth served in the Army National Guard from 1951 to 1952, during which time he married Vionne E. Formo, also of his hometown of Granite Falls, MN. Kenneth’s 32-year career in sales and marketing management with Northwestern Bell/AT&T entailed transfers to New Jersey, Iowa, Minnesota, and Kansas City. Throughout his career, and later in retirement, he and Vi enjoyed extensive travel around the U.S. and Europe. Ken was a member of Dexter United Methodist Church, and formerly a member of Hope Presbyterian Church in Richfield, MN where he was a Deacon and an Elder, as well as an avid choir member.

Ken and Vi moved to Chelsea in 2012 where they have greatly enjoyed being near family and living in a vibrant small town community. Most recently they moved to the Chelsea Retirement Community, expanding their network of friendships. The family is deeply grateful for the excellent caretaking of Ken at the CRC, St. Joseph Mercy Chelsea Hospital, and Arbor Hospice.

A memorial service will be held at a later date. Arrangements were entrusted to Cole Funeral Chapel in Chelsea. Memorial contributions may be made to Dexter United Methodist Church or the charity of your choice in Kenneth’s name.

You can share a memory or leave a public message for Ken's family by using the form below.  Please allow up to 24 hours for us to review and post your comments.