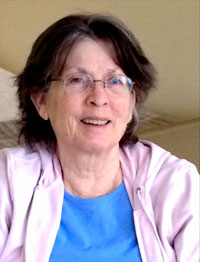 Age 80, died Friday, March 27, 2020 at the Chelsea Retirement Community. She was born January 8, 1940 in Detroit, Michigan, the daughter of Frydryk Yemans and Jane (Thompson) Henkel. Babs was a longtime member of the recovery community, known and loved by many of us. She was  an artist, and being serious about  "giving back", she returned to college (Wayne State) at the age of 60, getting her Masters in Art Therapy. She came back to Ann Arbor and was a prime mover in founding the Art Therapy program at Dawn Farm. Babs was a member of the Washtenaw Alano Club. She was a Master Gardener, and an artist (painter).   She went to High School at Kingswood School in Bloomfield Hills and got her BFA from Goddard College in Vermont.
Her husband recently deceased, Babs was shocked one day to get a letter from her long-lost teenage sweetheart. He had always wanted her back, and after a long internet search offering many names, he sent a letter to the likeliest one. She replied at once, they talked on the phone for the first time in 48 years, and started visiting by train between his home in Boston and hers in Ann Arbor.
They married in 2009 and lived in Dexter until Babs was moved permanently to Chelsea Retirement Center, where she was treated for vascular dementia. She died of blood deficiencies on March 27th.
Sad as this is, it does fulfill an overriding wish. Pooh says it best to Christopher Robin:  If you live to be a hundred, I want to be a hundred minus one day, so I never have to live without you.
Babs never lost her game, loving spirit, joking and laughing to the last with all she met, & thanking them just for wiping her nose.
She leaves her husband, David; a son, Sasha Bambas; a grand daughter Chloe DeLoach; and two daughters. We'll miss you, Babs –– may you enjoy your new life with our Ultimate Sponsor.  Have fun coloring the rainbows...
A viewing will be held at Cole Funeral Chapel, 214 E. Middle St., Chelsea on Saturday, April 4th in the afternoon. Due to Covid 19 situation, please call the funeral home at 475-1551 and we will schedule at time for you to speak with the family and pay your respects. We will follow social distancing protocol at the visitation for everyone’s safety.
Donations in Babs' name to: Washtenaw Alano Club, 995 N. Maple Rd, Ann Arbor 48103 (734) 668-8138 or Dexter Animal Clinic, 9500 N. Territorial Rd., Dexter 48130  (734) 426-4631 or Holiday's Restaurant, 2080  W. Stadium Blvd, Ann Arbor, Michigan,48103 (734)  668-1292
Click here to view or sign Barbara's online guestbook