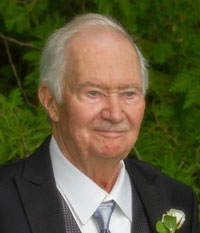 of Chelsea, Michigan, age 98, died Sunday, March 1, 2020 at his home. He was born August 6, 1921 in Lansing, MI, the son of Richard F. and Maude E. (Owens) Cavender.     Owen served in the US Navy from April of 1942 to October of 1943.  He worked for Dana in Chelsea for 37 years.
On October 16, 1948, he married Katherine Walters, and she preceded him in death on April 26, 1983. Survivors include his daughters Barbara Cavender and Alice Cavender, of Chelsea, and Katherine Cavender, of Ann Arbor; a sister, Theresa (Charles) Dinser of Whitmore Lake; a granddaughter, Michelle (Delmore) Brown of Saline; and 2 great-grandchildren, Owen and Kadence Brown. He was preceded in death by his parents; a son and daughter-in-law, Owen “Sparky” and Nina Cavender; and 3 brothers, Richard, Thomas, and Dale Cavender.
A memorial service is being planned, but details are pending at this time. A private graveside service will take place at Oak Grove Cemetery in Chelsea. Arrangements were entrusted to Cole Funeral Chapel.
You may use the form below to share a memory or leave a public message for Owen's family. Please allow up to 24 hours for us to review and post your comments.

#6 Debbie Stinehelfer 2020-03-06 16:39
My sympathies to the family. Mr. Cavender was such a sweet and gentle man and I remember him fondly. He was always patient when myself and other friends would tear through his house while having fun with his daughter, Kathy. Rest In Peace sir.
Quote
#5 Vernon Goodrich 2020-03-04 10:17
My deepest condolences to the Cavender family. I worked with both Owen and his son Sparky at Dana corporation for many years. They were both well liked and Owen was very knowledgeable in the tool room.
Quote
#4 Brenda Bauer 2020-03-03 14:11
Kindest man and neighbor ever. Praying for the family for Peace. So sorry for your loss
Quote
#3 Mary Heim 2020-03-03 12:40
My deepest sympathy Kathy, Alice and Barb, I have fond Memories of your father, he was always very friendly and kind.
Quote
#2 jim lyerla 2020-03-02 18:44
Barb,Alice and Kathy, I'm so sorry to hear of your dads passing. Remembered him well when Spark and I terrorized the neighborhood. RIP Mr Cavender
Quote
#1 Jacqueline Schiller 2020-03-02 16:26
My condolences to the entire Cavender family.
Quote
Refresh comments list