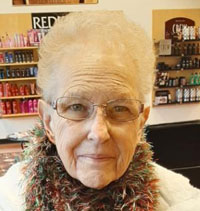 Age 73, died Friday, February 7, 2020 at her home. She was born November 3, 1946 in Ann Arbor, Michigan, the daughter of Walter S. and June May (Young)  Harris .
Beth graduated from Chelsea High School in 1965. She worked at the Chrysler Proving Grounds and then retired from Malloy Lithographing on Jackson Rd. in Ann Arbor. Beth was a member of the Ann Arbor Litho Club. She enjoyed sewing and making quilts. She attended the Christian House of Prayer with her son and daughter. She was a wonderful and very caring mother and grandmother.

In  1973, she married Paul Henry Ledwidge in Webster United Church of Christ, and he survives. Other survivors include her son, David (Monica) Ledwidge of Unadilla; three daughters, Angela (David) Readmond of Tennessee, Jennifer (Tom) Carlson of Chelsea, Sarah (Cory) Beardsley of Indian River; 7 grandchildren; 14 great-grandchildren; and one brother, Virgil (Sally) Harris of grand Blanc. She was preceded in death by a sister, Ernestine “Norma” Penix of Dansville.
A memorial service will be held Saturday, April 25, 11:00 am at the Christian House of Prayer in Pinckney,  with George and Carolyn White officiating. A private burial will be at Oak Grove East Cemetery in Chelsea. Memorial contributions may be made to Christian House of Prayer, 9949 Mcgregor Rd, Pinckney, MI 48169. Arrangements were entrusted to Cole Funeral Chapel in Chelsea.