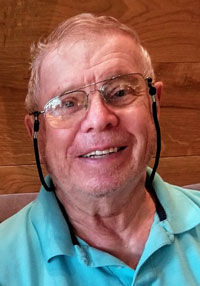 Dale Arthur Schumann of Chelsea, age 82, died Monday, December 23, 2019, at Henry Ford Allegiance Health in Jackson, MI. He was born May 8, 1937, in Saginaw, Michigan, the son of Arthur & Helen (Heindel) Schumann.
In 1958, Dale graduated from Ferris Institute (present-day Ferris State University) with a Bachelors of Science in Pharmacy.  In 1975, Dale moved his family from Ann Arbor to Chelsea, where he was a partner in Chelsea Pharmacy for many years. Dale served the community on the Chelsea School Board from 1978-1986, and as a Chelsea Village Council Trustee from 2000-2004. He was an avid bridge player, belonging to a bridge club that met for over 30 years. Dale also enjoyed making model planes, and was a huge fan of baseball. He loved running and being in the mountains.
On June 3, 1989, he married Nancy Seligmann in Sherman, CT, and she survives. He is also survived by his daughters, Theresa “Tracy” (Daniel) Kohler of Ann Arbor, Patricia (Peter) Feeney of Chelsea; his son, Thomas (Carol Sartorius) Schumann of Lakewood CO; their mother, Wyn Wendelken; his step-daughter, Andrea (Daniel Neri) Linkevich; 9 grandchildren, Olivia, Evan & Trevor Kohler, Austin (Audrey Huggett), Riley (Carrie), & Tate (Lisa) Feeney, Margo & Maximus Schumann, and Kason Neri; his brother, Robert (Margaret) Schumann; his sister, Susan (Bill) Keller; and several nieces and nephews. He was preceded in death by his son, Paul Schumann in 1982.
Funeral services will be held Saturday, December 28, 12:30 pm at Cole Funeral Chapel, Chelsea. The family will receive friends before the funeral from 11:00-12:30.  A private burial will be at Mt. Olivet Cemetery in Chelsea.  Memorial contributions may be made to United Way of Chelsea, PO Box 176, Chelsea, MI 48118.
Click here to view or sign Dale's online guestbook